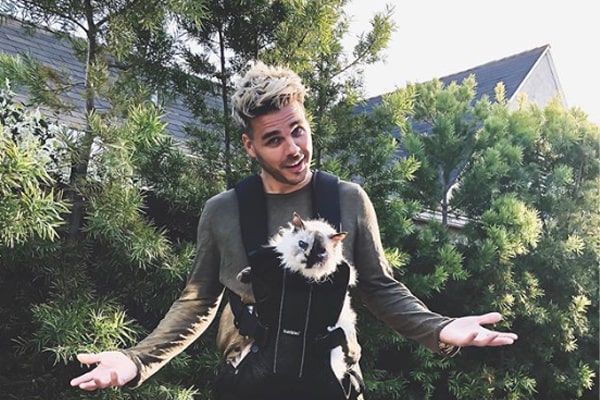 Joey Zehr has set up a big name of himself and his wife via their YouTube channel, Mr. Kate. Image Source: Joey's Instagram.
Quick Info

Room makeover is a huge thing today. Since people work from home mostly and are indulged in YouTube one way or another, there is a massive crowd of room-makeover videos and interior designers who show their skills via YouTube. Among millions, Mr. Kate is one of the exceptional channels that illustrates their journey of lifestyle, interior design, and DIY.

Mr. Kate comprises Kate Albrecht, Joey Zehr, and the team. Since Mr. Kate has grown massively since their initial days and has collaborated with numerous YouTube stars, Joey has become a household name. So, let’s get to know about Mr. Kate’s husband, Joey Zehr.

Joey Zehr met his love of life, Kate Albrecht, in 2007 when Kate was an actress, and he was in a boy band, The Click Five. Since then, they have been together, growing emotionally, and building a great relationship. Joey made his wife a blog as her birthday present in 2009.

Joey Zehr’s wife, Kate Albrecht, is an innovative woman with great creativity. Born on June 4, 1983, in Los Angeles County, California, USA, Kate is the designer and co-founder of Mr. Kate along with Joey. According to HGTV, the couple thinks that working together has been the greatest thing that has happened to them as they dreamt of it for a long time. 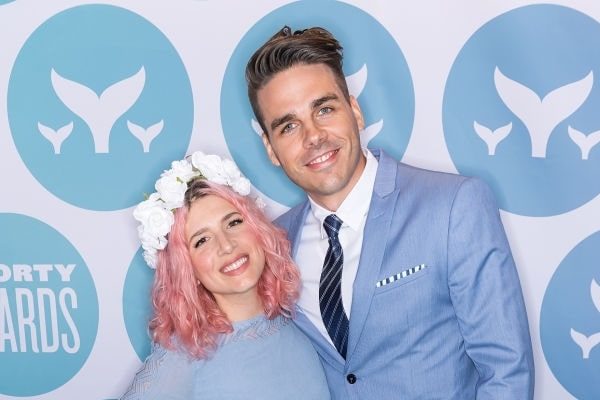 The couple is making their dream come true by working together and building am empire. Image Source: Getty Images.

Joey Zehr’s partner believes that there’s certain magic as they work together since both of them are different and bring varieties of ideas to the table. Joey and Kate balance out one another, both emotionally and professionally. As Joey’s spouse is the creative one and has different ideas, he helps execute them.

According to Joey Zehr’s IMDb, the couple has been married since 2013 and are still going strong. In a YouTube video, Zehr’s wife revealed that she did not envision her fairytale wedding, and they went to court to quote them as a married couple. Sounds Interesting.

The couple recently welcomed a new member of the family and are happy than ever. They recorded their pregnancy journey and took their fans along while preparing the nursery for their baby boy, Moon Albrecht Zehr. They welcomed their son on June 10, 2019.

Joey Zehr’s baby is a blue-eyed little guy with great smiles and is the heart of his channel, Mr. Kate, today. Let’s hope the family grows steadily and continues to spread love and creativity.

What Is Joey Zehr’s Net Worth?

Joey Zehr is a multi-talented person as he is not just involved in designing and making Kate’s imagination come true but is also a musician. Throughout the journey, Joey Zehr’s net worth has grown massively and is continuing to proliferate.

Although Joey Zehr’s fortune is not numerated and is still under the shade, seeing his hard works, it is evident that he is living a comfortable and luxurious life. Zehr’s prime source of income is the YouTube channel with his wife, Mr. Kate. The couple started the channel in 2009 with their innovative ideas.

Since then, Mr. Kate has grown massively and has amassed 3.92M subscribers worldwide as of now. The channel started from the bottom and has been growing steadily. According to SocialBlade, Joey Zehr’s fortune from the channel is estimated at somewhere between$34.8K – $557.2K per year. Furthermore, he serves as COO of the company, Mr. Kate.

Mr. Kate has renovated several houses, and their fame escalated as they worked with star YouTubers like Liza Koshy, The Dolan Twins, Colleen Ballinger, Jeffree Star, James Charles, Jason Nash, and many more. Their small channel has grown from a little lifestyle blog to a full-fledged brand. Few items from their merchandise are listed below, along with their respective prices.

Following the growth, the channel managed to set to parlay their online fame onto linear TV. Joey Zehr and his wife premiered their show, Help My House! on HGTV in 2019. This little stretched arm also helps in Zoey’s wealth. Furthermore, the couple purchased an old “storybook” house and decided to share the whole renovating journey with the fans. Thus, the series, “OMG! We Bought A House” began.

Before Mr. Kate, What Was Joey Zehr’s Source Of Income?

There is always a situation that changes one’s life forever, and for Joey, it happened to be Mr. Kate. But before Mr. Kate, he was already a famous drummer in a popular boy band called The Click Five.

According to Mr. Kate’s site, before Mr. Kate, he owned an online brand development company. Likewise, he was an owner of entertainment production companies Good Day Productions and Yeah Man, Inc. Likewise, he also had a record deal with Warner Music’s Atlantic Records for his band. Therefore, it is evident that Zehr’s income was pretty steady back then too.

Together, Joey Zehr and his wife formed a special bond and unique skills that have leveraged their YouTube career and experiencing momentous changes.

Where Are Joey Zehr’s Parents?

Joey Zehr was born on May 10, 1982, in Indianapolis, Indiana, the USA as Joel David Zehr. He has kept his parents away from the spotlight but looks very close to them. And as per HGTV, Joey’s parents are also tall like him. Plus we can assume that Joey must be close to his in-laws,  i.e. Kate Albrecht’s parents.

Furthermore, Joey is a joyous person and grew up along with his brother singing and having fun.

My brother singing for the crowd in an Irish bar in France @ La Gitane – Irish Bar http://t.co/k4vvIwLP

Joey Zehr grew up in a family environment and was serious about his education. He is a double major in production/engineering and business at the Berklee College of Music. Joey is a talented man sharing his fun elements with the world. Let’s hope he continues to grow in the future and succeed as a father and a businessman.