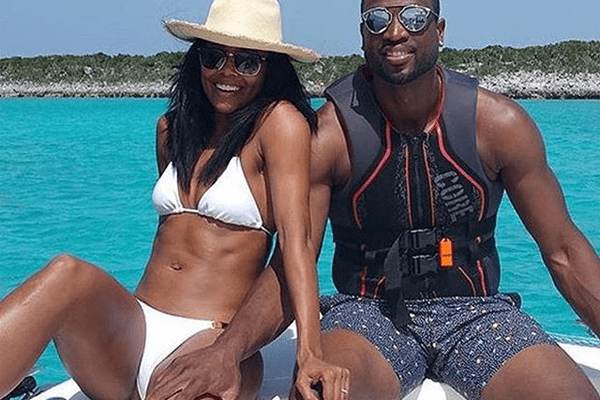 The very beautiful Gabrielle Union has had a wild past with Dwyane Wade but her recent trip to Greece with husband Wade shows that the couple has passed all of the past and is opting for a fresher and newer start.

The Being Mary Jane actress posted a picture of her and Dwayne holding each other arm to arm on the beach in Myknos, Greece.

The couple’s anniversary get-away seems to be going great. Gabrielle looked stunning in her bikini and Dwyane looked equally dashing while he showed off his abs.

Not only was Gabrielle excited about the trip but Dwyane himself took to Instagram to post a picture of his shirtless-self showing off his six pack abs. Dwyane captioned the picture “I’ve decided to go on a LIVING spree because I deserve it” and the 35-year-old NBA Pro definitely does.

I’ve decided to go on a LIVING spree because I deserve it! #mylifemyway #mykonos #makeyourownway

Gabrielle gave her fans a show off of her sultry pictures in her Instagram pictures. She posed flawlessly besides the swimming pool in a tiny sporty pop pink bikini.

This is the couple’s early third-anniversary trip. The couple also took along some of their closest friends for the celebration of their anniversary. The entire lot seemed to be enjoying. Dwyane posted an Instagram picture of all the crew having a lovely time.

The couple also hilariously posted a video of the time when they were opting to take a picture with Union sitting on Wade’s shoulder but the security intervened. Gabrielle Union, 44 captioned the picture, “When they don’t want you to be great…”!

Gabrielle Union and Dwyane Wade got married on August 30, 2014. Gabrielle was previously married to Chris Howard. Dwayne was previously married to Siohvaughn Funches with whom he has three sons named Xavier Zechariah Wade, Zion Malachi Airamis Wade, and Zaire Blessing Dwyane Wade. There was a dispute between Wade and Union over Wade’s previous relationship but the couple later reconciled.