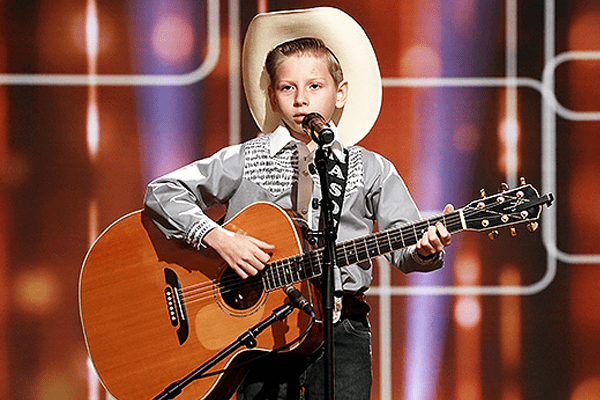 11-year-old Mason Ramsey, the Yodeling boy who made his way from Walmart to Ellen DeGeneres show was certain to take a next step to delight  millions of music fans.

And he did on Friday night, April 27, in Indio, California making a surprise appearance on Stagecoach country music festival!

American musicians Tyler Hubbard and Brian Kelly, both in their cowboy hats welcomed the viral star Mason Ramsey in the stage for his surprise performance.

Ramsey then appeared at the stage in his Hank Williams outfit and cowboy hat all set to perform ‘Lovesick Blues’, Hank Williams 1949 signature weeper. Ramsey also announced about his debut Famous, his first release on Atlantic Records and Big Loud with a more modern sound.

With this, Mason Ramsey has become one of the youngest star after Billy Gilman to sign to a major Nashville label.  Billy Gilman was the same age when his debut, One Voice was issued in 2000 which became a hit.

However, this was not Mason Ramsey’s  first appearance. He had also performed with DJ Whethan in a cameo at Coachella about two weeks ago. 18-year-old DJ Whethan was so impressed by this rising star that he invited Ramsey to share the stage and sing ‘Lovesick Blues.’

Ramsey is really happy with what he has achieved and sings; ” It’s pretty cool to be on TV.” in his debut. He made a statement that he never thought something like this would happen to him. It was a dream come true for him.
The Famous for lovin’ you singer said,” I loved recording Famous and can’t wait for everyone to hear it.”
For more interesting news, stay updated with SuperbHub.
Billy GilmanBrian KellyDJ WhethanTyler Hubbard