Home / Celebrity News / Wedding bells on the way! Sam Hunt to be married to Hannah Lee !

Wedding bells on the way! Sam Hunt to be married to Hannah Lee ! 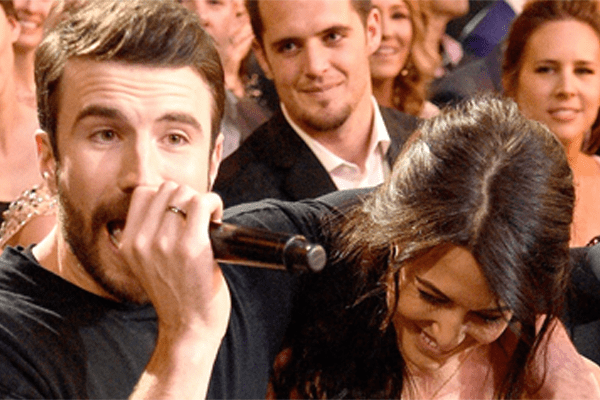 Singer Sam Hunt has stolen our hearts once and again through his exceptional music. However, it is Hannah Lee who has stolen his heart! Sam Hunt wrote a ring at the ACM Awards on 2nd April in Las Vegas and put up a show for his fiancé Hanna Lee to clarify to the public that they will be getting married pretty soon. Let us get the details!

When Sam Hunt entered ACM Awards wearing a ring, the paparazzi had a lot of questions! And Sam was generous enough to answer them.

While asked about it by CBS, Sam cleared by saying that he had decided to put it on and did not want to take it off because it felt good. Furthermore, he added that there were “only a few weeks left” before the couple got married!

While on stage at the ACM Awards singing his hit “Body Like a Blackboard”, Hunt romantically got off stage and walked towards his fiancé, sat beside her and wrapped his arms around her while still singing the song.

The much astonished and embarrassed Hanna Lee Flower could not wipe the laughter and smile off her face. She even playfully pushed Sam when he was about to gently kiss her. The couple looked adorable in the AC Awards.

While talking about the upcoming wedding, Sam Hunt revealed that he would like to keep the event “Intimate and Hometown” since he and Hanna are both introverts. He also added that it is a “big leap” in comparison to all the smaller steps the couple has taken till date. While talking about fiancée Hanna Lee, he shared that Hanna is “optimistic” and that she is “smiling” which is a good sign.

When asked about the decision to get married this soon, Sam Hunt shared that when the “heart radar” taps on the shoulder you know that it is time and that he did too! He added that it is the right time to celebrate the union of marriage and he is excited about it.

Sam Hunt met Hanna Lee Flower in 2008 and began dating. Their relationship led to an engagement in January 2017. In an interview, Sam Hunt revealed that he had been slowly introducing Hanna to her new lifestyle bit by bit since the past 6 months. Congratulations to the soon to be bride and groom!