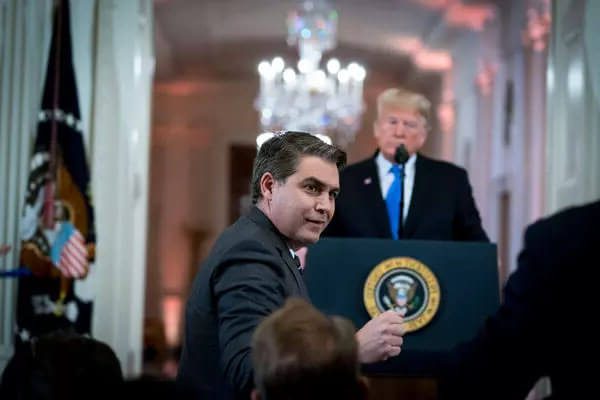 On Friday Morning, a reporter asked President Trump at a Q& A session about how long he is going to leave CNN chief White House correspondent Jim Acosta in the penalty box. In response, Trump said that he hadn’t decided yet but it could be with others too.

I’ve just been denied entrance to the WH. Secret Service just informed me I cannot enter the WH grounds for my 8pm hit

So, What actually happened?

Jim Acosta on Wednesday press conference started questioning, in fact challenged President Trump’s use of word, ‘invasion’  to describe about caravan migrating to the US from Central America. And then pointed out about an anti-immigration advert which was seen as racist.

President Trump seemed unhappy and agitated with his questions. When Jim Acosta started asking about Russian investigation in the 2016 presidential campaign, Trump repeatedly asked Acosta to put down the mic.

Well, Acosta was firm to ask his questions. But when a White House staff member came to take the mic from Jim Acosta’s hands, he resisted but was polite. He said Pardon me , ma’am and kept asking his question. When the member tried to grab the mic, Acosta moved his arm to shield it and then his hands touched her arms but only for a brief moment.

Trump then called Acosta a rude and a terrible person. Trump added by saying that CNN must be ashamed of employing Jim. He added that the way Jim Acosta treat Sarah Huckerbee is bad, horrible.

When another journalist spoke up and called Jim Acosta a diligent reporter, President Trump said him that he wasn’t a big fan of him either.

On top of that White House Press Secretary Sarah Sanders circulated a video, an edited video claiming that Acosta had his hands on a young woman.

On his defense, Jim Acosta said that he was trying to hang on with the mic because he wanted to continue ask questions.

CNN also responded in Twitter saying that the action by White House was to retaliate the challenging questions at the conference.

Other press corps also came in Acosta’s defense and twitted in his favor.

I was seated next to ⁦@Acosta⁩ at today’s press conference and did not witness him “placing his hands” on the young intern, as the White House alleges. He held on to the microphone as she reached for it. The ⁦@Reuters⁩ pictures below depict what happened accurately. pic.twitter.com/nO68Hf4eQM

For more news updates along with celebrity entertainment and articles, stay in touch with SuperbHub.