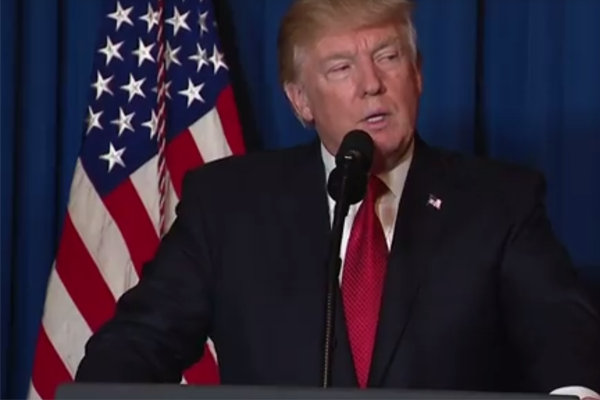 Trump talking to media after air strike in Syria.

After launching a missile strike on Syria with the help of Britain and France, President Donald Trump called the entire operation “a massive success.”

After the attack took place, he tweeted the following:

A perfectly executed strike last night. Thank you to France and the United Kingdom for their wisdom and the power of their fine Military. Could not have had a better result. Mission Accomplished!

So proud of our great Military which will soon be, after the spending of billions of fully approved dollars, the finest that our Country has ever had. There won’t be anything, or anyone, even close!

France, Britain and the United States launched a total of 105 missiles near the capital Damascus and the West of Homs and mainly targeted three places: an important research center, a storage facility, and an equipment store. All these three placed were associated with the chemical weapons program of Syria.

This missile strike was a response to the chemical weapon’s  attack on the rebel-held town Douma killing more than 42 people. The chemical attack reportedly ordered by the Syrian Government in co-ordination with Russia, which the latter denies.

You can see the footage of the aftermath of the attack below:

This attack on Syria comes almost a year after their previous strike. However, the attack this time was of a much bigger capacity. “This time, thanks to our allies we have struck harder” said the secretary of Defense Jim Mattis .

The map of Syria below shows the areas where the missile strike took place:

The other interesting thing to note is that, according to Mattis, they intentionally didn’t target any Russian troops to prevent a larger conflict.

According to President Trump, they shall continue the attacks until Syria stops using chemical weapons on its civilians. This is similar to his stance on North Korea. You can hear Trump speaking about the missile attacks below: