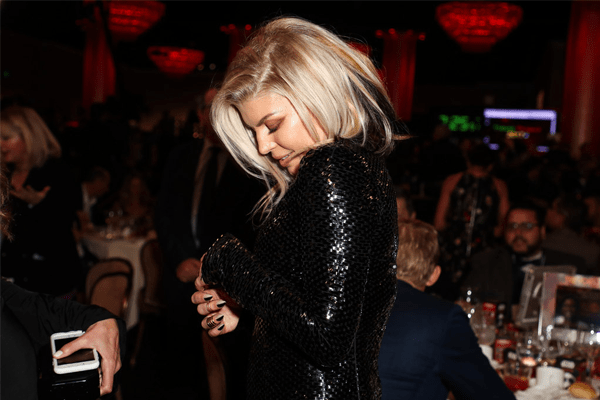 Photo credit: Footwear news
We already know that the singer, Fergie split with her husband Josh Duhamel in September and she always takes few steps forward when it comes to showing the single status. The melodious singer took the breath away as she showed up at a fundraisers event Trevor Live in LA. The event took place on Sunday night, December 3, 2017, as per the world news. She flaunted in the Skintight black dress.

Fergie was in almost Femme Fatale appearance with the seductive look with her platinum blonde hair. She was pouting her coral lips in the photo session on the red carpet.
Double Dutchess recording artist exposed her curves in the long-sleeved dress above her knees. She wore a clunky shoe with pointed heels.
She had added an eye-shadow that corresponded her lipstick and some mascara on her eyelashes.
There were some special guests for TrevorLIVE 2017  like Kristin Chenoweth (Icon Award Honoree) And Tom Ford (Hero Award Honoree)
The Trevor live event also honored actress and singer Kristin Chenoweth, 49.
Kristin showed up like a Disneyland princess in a strapless gown with pink tulle skirt and black bodice.

This project named Trevor live provides crisis counseling and suicide avoidance for LGBTQ youth and This gala event is one of the dual annual benefits for the non-profit organization.

Armie Hammer, star of the critically renowned movie Call Me By My Name, which displays about a gay love affair also showed up for the fundraiser Trevor live event.

Armie was in an armada two-piece suit and a white shirt along with a black tie.
His wife also joined the event with him, Elizabeth Chambers. She looked beautiful in a gummy long-sleeved black dress with a keyhole bodice.

Former Sex And The City star Kristin Davis, 52, was seen in a classic green satin blouse and black pants with a black belt.
Phoebe, the weirdo of the TV series friends was also at the Trevor live fundraiser event. Lisa Kudrow was in a black jumpsuit.


Thank you so much armiehammer for supporting our lifesaving work ? Remember, we&39;re here to support you 24/7 at: 866.488.7386 ? TrevorLIVE lgbtq pic.twitter.com/PXC4WVFvYo

Thank you so much armiehammer for supporting our lifesaving work ? Remember, we&39;re here to support you 24/7 at: 866.488.7386 ? TrevorLIVE lgbtq pic.twitter.com/PXC4WVFvYo