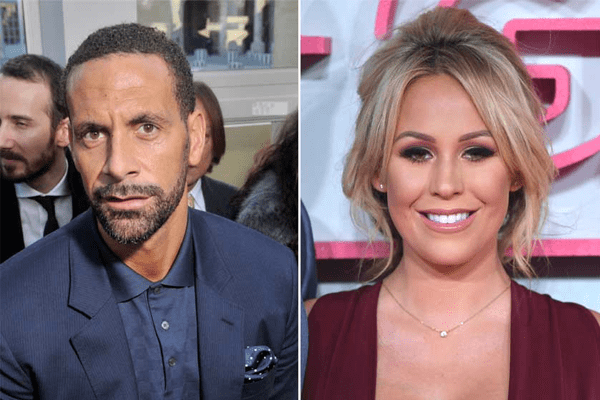 Picture source: celebsnow.co.uk/celebrity-news
The world has been shocked at the news of the romance brewing between Kate Wright and Rio Ferdinand. But the TOWIE’s cast has been affected the most! Why do you ask? Kate Wright’s ex-boyfriend, Dan Edgar was a part of it. Co-Star and friend of Dan, James Lock makes revelations about the on-going romance between Kate and Rio.

The beautiful, Kate Wright is known best for her work in The Only Way Is Essex. Wright has also familiarized herself with her hit show, TOWIE in ITV. Kate was in a relationship with her previous boyfriend, Dan Edgar for six long years. The couple event went on to have their show on ITV.

Last summer the couple went on to quit the show after a split up. The fans went crazy over the quit. They mourned for the breakup and desperately called Dan and Kate to get back together. However, Kate had other plans!

More recently, a friend and co-member James Lock revealed that the beautiful, Kate and the former England Player, Ferdinand began having an affair back in Dubai. The couple has been secretly having romantic visits time to time.

After a romantic gesture by her ex Dan on Christmas, Kate and Dan’s fans believed that things were going to be just fine between the two. However, they poured cold water in the burning rumor. Twitter flooded with their supporters and fans asking them to get back together. After six years of togetherness, the breakup between the lovely couple seems highly unlikely and disappointing.

Coming back to Kate and Rio, now there have been rumors the couple met back in Dubai in January of this year. Kate went to Dubai this year to meet her family and friends. She went there to put her past behind and talk it out!

Kate’s friend, James revealed that the couple was ‘a bit of a shock to the system for everyone’ since them getting together was highly unlikely.

James lock revealed that he has sided Dan on this one because apparently, Dan still loves Kate and Kate have now left Dan ‘in the lurch’ by pairing with Rio. James Lock has, however, sent best wishes to the new couple and believes that the Rio is ‘a family man’.

Will Rio and Kate settle down? Or will Kate head back towards Dan? We may soon find out!