Home / Nikki Bella finds it annoying when Brie Bella expresses that John Cena can’t be uncle to her baby!

Nikki Bella finds it annoying when Brie Bella expresses that John Cena can’t be uncle to her baby! 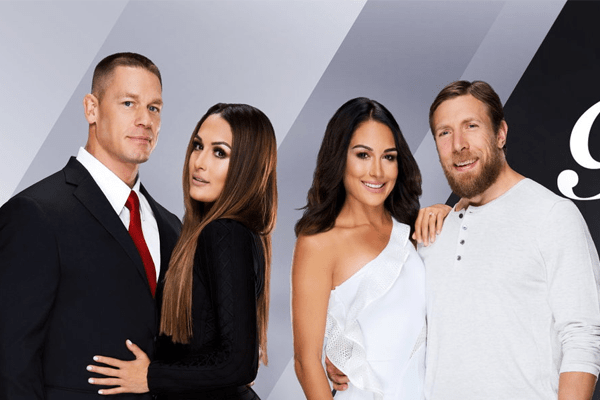 Photo Source: hulu.com
Well, it all started in a preview of Total Bellas show from the Wednesday’s season. Total Bellas show premiered on October 5, 2016 on E! TV featuring twin sisters Nikki Bella and Brie Bella, the two most famous WWE divas. This is the show that aims on showing the sisters lives who are romantically involved with former WWE champions, John Cena and Daniel Bryan, respectively. Apart from the big stage, the ring and fans’ applause, it shows that side of their lives which captures interest of many, their family , their relationships and significant others.

Coming back to the real family drama, the scene started with sister Bellas, John Cena and family sitting together and attending a dinner in San Diego. In the midst of the dinner, Brie asks Nikki to come out of the dinner table and speak to her in private. Nikki was a little surprised at the request.

As soon as they leave the table and got away from the family, Brie started to express her thoughts related to John Cena. According to her, John Cena has not been familiar with them. He had never been in the picture and is always gone. So she is pissed off with him.

Nikki wasn’t expecting that comment from her sister and speaks that is not true at all. He totally is the part of the family and he treats him like his wife. But Brie says that Nikki is not his wife yet. Thus, She thinks her baby Birdie, shouldn’t call him shushu( uncle in Chinese).

Brie insisted on saying that John Cena has never been there for the family. So her baby can’t call him Uncle which made Nikki more annoyed. Therefore, she stormed off and went back to the table by saying that if that is what she thinks then it’s ok that her baby Birdie won’t call him uncle.

After reaching back to the table, Brie continues her same saying by confronting John Cena that Birdie won’t call him Uncle because he is never there for them. Thus, he needs to prove it to the family that he really cares and is the part of the family. According to her, Bryan and she had gone and helped both Nikki and John with their surgeries. So she expect the same from them.

She is left silent when asked by John Cena then why was not Bryan joining them that night.

With lots of going on, the show Total Bellas is really gaining lot of fans attention specially when it revolves around the world of WWE famous divas and champions from men’s side. Check out what Nikki Bella has to say this incident in her instagram.

Daaannnggg @thebriebella! Tomorrow night tune in to an all NEW season of @totalbellas and see what’s up with the name ShooShoo for my Love @johncena! Family really loves to hit ya where it hurts! #totalbellas #nena #braniel #bellaarmy #Repost @totalbellas ・・・ John has a lot to prove if he wants to stay in the Bella fam. Watch #TotalBellas TOMORROW at 9|8c, only on E!