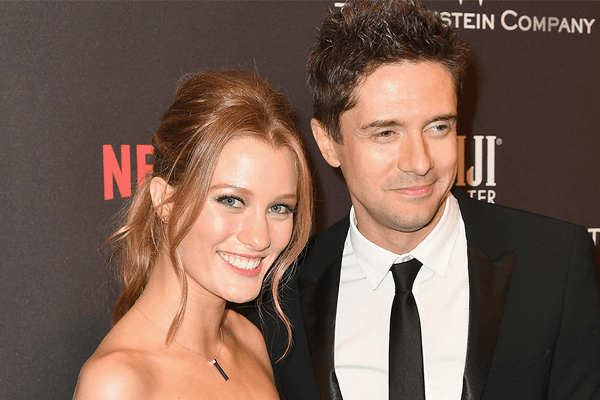 Photo Source: etonline.com
Topher Grace and Ashley Hinshaw are about to become parents! It has been confirmed by the soon to be a mother herself, Ashley Hinshaw. Ashley Hinshaw is pregnant with her husband Topher Grace. Th couple is expecting their first born. Let us get into the details of his happy news!

The rumor mill had picked Topher Grace and his wife Ashley Hinshaw this week. On 15th July there were rumors brewing that Ashley Hinshaw is pregnant. The couple was spotted together enjoying a lunch out. The paparazzi immediately spotted a small baby bump under the form-fitting striped dress that the lovely actress was wearing.

Ashley Hinshaw, however, took us by surprise with her very casual yet cute baby announcement. She took to Instagram to post a radiant selfie of herself. What caught the eye was the caption underneath that said that revealed that she was “6 1/2 months pregnant”. She shared her happiness at being treated “like a princess” when somebody else does your hair and makeup.

When you’re 6 1/2 months pregnant and someone else does your hair/makeup/wardrobe and makes you feel like a princess ? for the first time in a whiiiiile ??

The 28-year-old actress who is known best for her work in StartUp has kept her pregnancy revelation simple. Topher Grace has also not been much vocal about the fact that his wife Ashley Hinshaw is pregnant. Both of them have been silent about their pregnancy. At present Topher Grace is busy promoting his Netflix special Opening Night’s.

Topher Grace met his wife Ashley Hinshaw in 2014. After two years of dating, the couple got married in May 2016. Grace and Hinshaw have mostly been focused and busy in their hectic schedule. However, they have most certainly found a way to love each other.

It has not been long since he couple got married and they are already having a baby which is great for the couple. Their fans are eager to see what kind of parents the couple will be after the birth of their first child. The Instagram post was far from flashy. This subtle indication warmed many hearts. We wish the best for the soon to be father and mother, Topher Grace and Ashley Hinshaw!