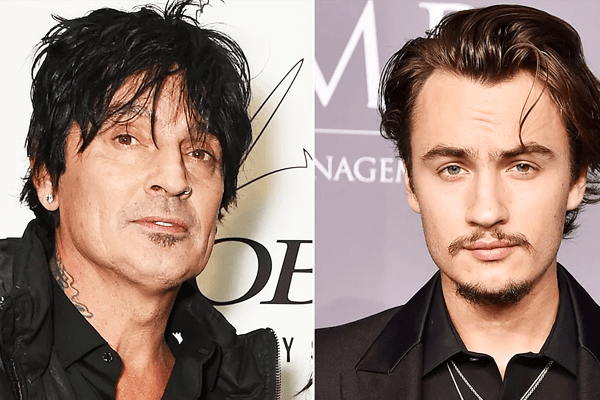 Tommy Lee’s face needs some fixing and repairs as his 21-year-old son Brandon Thomas Lee left the drummer bloodied. Tommy Lee and his son reportedly got into a fight resulting a fat lip from his son.

The fight happened Monday night and police responded to Tommy’s Calabasas home around 10:45 PM, no arrests were made but officers took a report. Brandon is Tommy’s son with Pamela Anderson with whom he was married for three years in the mid-90s.

Hey @TMZ maybe get your facts straight before you go reporting bullshit. My fiancé and I were in bed when my son busted into the room and assaulted me. I asked him to leave the house and he knocked me unconscious. He ran away from the police. THAT’S the truth.

Tommy lashed on TMZ on his twitter for reporting fake news, he states that he was in his bed with his Fiance when his son busted in his room and assaulted him.

Tommy had asked his son to leave the house then Brandon knocked him unconscious and ran away from the police. The drummer concludes by saying that’s the truth.

The Los Angeles County Fire Department had confirmed to E! News that they had responded to Tommy’s Calabasas home at around 10:50 P.M for an assault call.

Tommy had posted on his Instagram a bloodied fat lip which he soon deleted, while TMZ managed to exclusively save it. 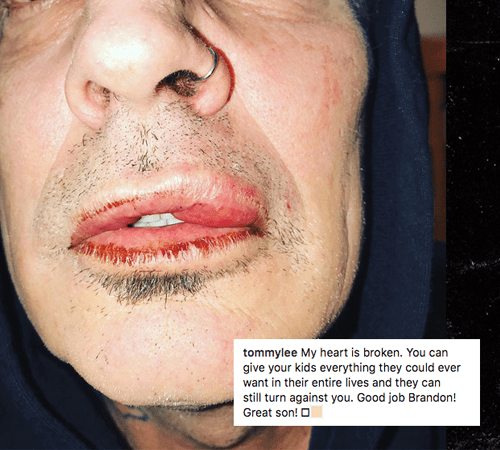 While TMZ also reports Brandon was defending himself when the incident took place. Brandon acted in total self-defense while Tommy was Drunk.

The same night Tommy had responded to a recent interview with Pamela in which she had talked about Lee’s abusive nature towards her.

@piersmorgan ur interviews w/ Donald Trump & my ex-wife are pathetic! Think she’d find something new to discuss instead of rehashing old shit but I guess she has nothing else going on & needs attention ??‍♂️

Signed,
“The abuser” (who she texts everyday & asks for me back)

@piersmorgan ur interviews w/ Donald Trump & my ex-wife are pathetic! Think she’d find something new to discuss instead of rehashing old shit but I guess she has nothing else going on & needs attention ??‍♂️

Signed,
“The abuser” (who she texts everyday & asks for me back)

Tommy Lee is getting backlash on Twitter because of his childish behavior. He should remember back the time he was 21. A lot of teenage kids are angry and he should not make an issue out of it. It is not also about being right.

Lee and Pamela also share another 20-year-old son Dylan Jagger. Tommy engaged to his girlfriend Furlan on Valentines Day of 2018