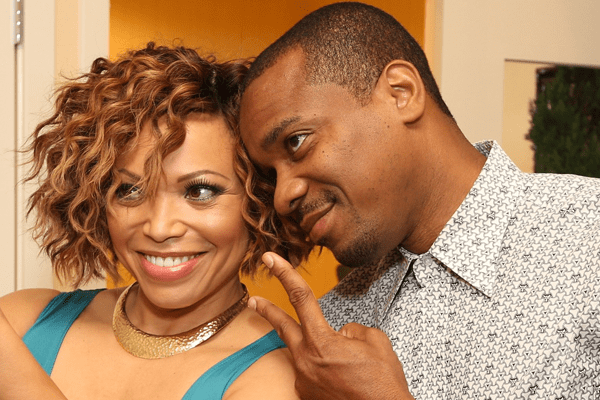 After more than two decades of marriage, Tisha Campbell has filed for divorce to her husband Duane Martin.

Tisha who is renowned as Gina from the 90s sitcom Martin announced on February 22, 2018, in a Twitter statement that after 27 of being together and having two children it had been a pain to announce that she filed for a divorce.

After 27 years of being together and 2 amazing children, it pains me to announce that I’ve filed for divorce. It’s an emotional time and I graciously ask for privacy for me, our children and the rest of our family.” @DUANEMARTIN_ said to me Best this morn “we are family FOREVER”

The actress added to E! News that it was an emotional time and she graciously asks for privacy for her, children and family. Tisha and Duane have together worked in Real Husbands of Hollywood and Deliver Us From Eva. The Couple tied the knot after six years of dating in 1996. The couple has welcomed two sons together Ezekial Martin and Xen Martin.

Tisha Campbell is a two time “Outstanding Actress in a Comedy Series” winner in 2003 and 2004. In early 1997, Campbell had filed a lawsuit against co-star Martin Lawrence for sexual harassment and abuse both on and off the set.

Xen Martin, the eldest son of Tisha Campbell and Duane Martin was diagnosed with Autism when he was 18 months old. Tisha was reading the book What to Expect the First Year but Xen wasn’t behaving according to that book. She already knew something was wrong and the diagnosis happened. She threw away the book literally.

Xen developed habits like licking the walls and public banisters. Tisha and Martin were told that Xen might not talk. But the ex-duo gave as much attention as they can give to Xen. Tisha worked and taught Xen to bite his nails instead of licking walls. And it is socially acceptable too.

At, first they were not sure if they want to have a second child or not but Xen wanted a sibling very badly. They decided to have their second child Ezekiel Czar Martin when the autism of Xen became manageable.

Look who rolled up on me in #vancouverbc !!!! @duane_martin and my babies #myfam #visitingmama #stillmybabiestho