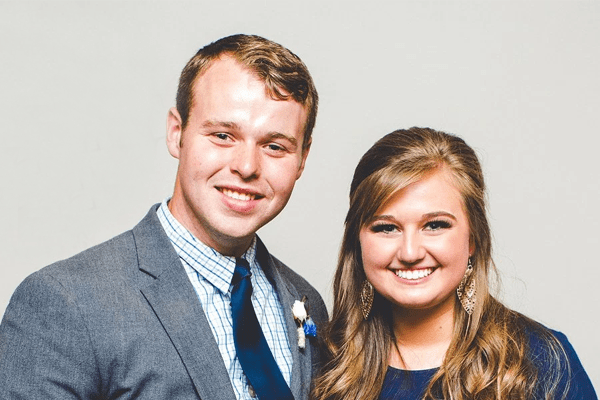 Photo Source: p e o p l e . c o m
Another Duggar Child has tied the knot on Friday, September 8 and brought his life partner home. Seventh Child of Jim-Bob Duggar and Michelle Duggar, Joseph Duggar from giant family of 19 siblings is the sixth child to get married in the age of 22. Duggar have found his soulmate Kendra Caldwell, 18 who have been a very close family friend for a long time. The wedding took place after four months of engagement.

Duggar and family are famous through TLC reality series 19 kids and Counting. The show aired on TV in September 29, 2008 and gained massive popularity. Joseph Duggar was just 13 when the family came to the TV world.

TLC posted a video which showed Joseph Duggar expressing a message that he and his wife are happily married now. He also said that he started crying when he saw his soulmate walking down the aisle wearing a white cap sleeve wedding gown with a sparkling bodice. She looked beautiful bride.

Kendra also said “I think when we said, ‘I do’ inside our vows and everything, it really was a super sweet time and it was just made it more real,” The first kiss after taking the vows was amazing to the couple like for every other couple. It was really cute to hear when Joseph began by saying ‘that was’ and Kendra completed with ‘Amazing’. Joseph said that the first kiss blew away all the expectations he had for the first kiss.

Joseph Duggar is really in love with his fiancé Kendra and is all set to start a new beautiful journey with her. The couple Joseph Duggar and Kendra Caldwell have even mentioned that they are planning to start their own family soon.

19 kids and Counting is one of the most popular shows of all time which aired in TV from 2008 to 2015. The show started with name 17 kids and counting and was retitled when the Duggar couple had two more kids. The show revolved around showing how the parents of 19 kids managed to raise them up and do all the basic to most important tasks in home and family. The show came to an end in 2015 which is said reportedly in light of criticism due to the scandal of Duggar’s eldest son Joshua Duggar. He had been investigated and self-confessed to assaulting five underage girls in his teenage.

More updates about the Duggar family can be viewed through their family blog: duggarfamilyblog.com