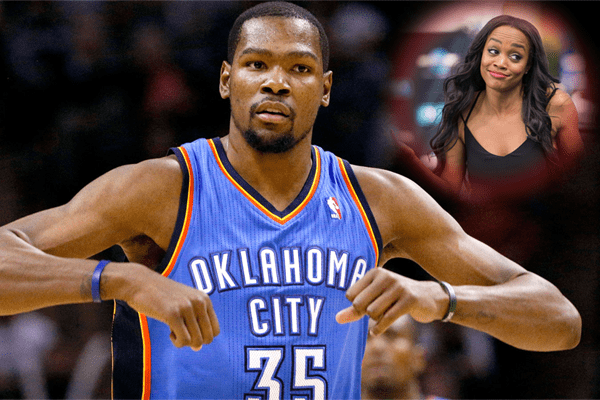 Rachel Lindsay has been trying to find love in the Bachelorette’s 13th season but before that, she is known to have dated the Golden State Warriors’, Kevin Durant! US Weekly gives an insight to Rachel’s personal life and her relationship with the NBA star, Kevin Durant. Let us get int the details of this interesting revelation on Rachel Lindsay’s personal life.

An insider gave the deep details about Rachel Lindsay’s personal life to US Weekly. Rachel Lindsay, 31, was in a relationship with 28-year-old, Kevin Durant. Lindsay met Durant back in the University of Texas at Austin. The two stayed in a relationship as long as they attended college. The insider revealed that “they broke up” when Lindsay left for her law school and that the split was amicable. It was also revealed that the two had a “pretty serious relationship”!

After the relationship ended, Lindsay went on to attend Marquette University to study law. Durant then went on to join the NBA’s Golden State Warriors as a small forward. Durant was engaged to WNBA champion Monica Wright. He is also known to have dated many models like Crystal Renee and Chantel Jeffries.

On 18th May, Lindsay made revelations to the US Weekly that she is engaged to one of her suitors and that she is “so in love”! Rachel Lindsay seemed to be head over heels over her fiancé. She shared with US Weekly that she wakes up every morning and pinches herself and asks if “this is really happening”! Rachel seems to have fallen deeply in love.

Furthermore, Rachel Lindsay shared that she feels like she does not “even deserve this”. She feels that she is “getting everything” that she wants and is ultimately getting her “happy ending”! We hope it is just that.

This first African American Bachelorette has been taking the franchise by the storm. With the first impression rose she has been breaking all the records. She has gained big support from all the previous Bachelorettes and seems to be very much ready to “find a husband” and “star a family”!

Rachel has been doing extremely well not only as the most adored Bachelorette but also as a successful attorney. We will have to keep an eye of ABC’s The Bachelorette on Mondays to find out where Rachel Lindsay’s love life is going.


Tune in TONIGHT for another exciting episode of the BACHELORETTE on ABC 8/7c...you never know… https://t.co/Rk16QkZWOD

Tune in TONIGHT for another exciting episode of the BACHELORETTE on ABC 8/7c...you never know… https://t.co/Rk16QkZWOD