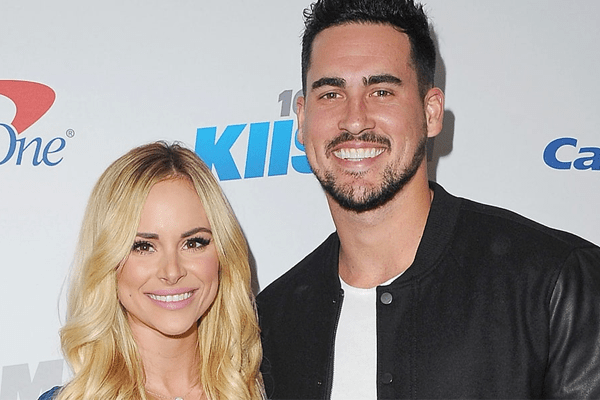 Actor, Josh Murray and his ex-fiancee Amanda Stanton had been separated for a long time. But looking at the image of Josh Murray kissing Amanda Stanton which was shared on 20th February gives off a hope that the couple may be reuniting. Josh Murray has finally addressed these rumors of their reunion. Let’s get into the details.

Earlier their year, the cute couple, Josh Murray, and Amanda Stanton shared to the media that they had broken up. The couple had been in a relationship for less than six months. Their separation came to many as a shock because they looked like a promising couple.

However, people began having mixed thoughts when the photos of the couple kissing after their break up began surfacing. Murray and Stanton were at a PDA-filled dinner date at Katana Japanese Restaurant in Los Angeles.

After the lovely dinner, the couple walked down the lobby hugging each other and kissing. Josh and Amanda could not wipe the smile out of their faces. They looked delighted with each other’s presence!

Amidst all the rumor of the couple getting back together, josh finally made revelations on what was actually going on between the two. On a facebook live interview with ET’s Lauren Zima, Josh Murray shared that he had only seen her after a long time and that ‘there were conversations that needed to be had’ and that they and a lovely dinner.

Josh furthermore added that whenever the couple is out together away from the show and the drama, the couple has a good relationship. He said that the evening was good and that they had a good time.

Both the couple have been previously married to their respective spouse and separated. Amanda has two daughters with her ex-spouse.

The couple might be taking things slow this time around. We hope the best for them!


When you tell someone you&39;re praying for them, are u really? Or are u just saying that & then forget? My advice - say an immediate prayer ??

When you tell someone you&39;re praying for them, are u really? Or are u just saying that & then forget? My advice - say an immediate prayer ??