Home / Celebrity News / Pippa Middleton gets wed! Get inside the one of a kind royal reception

Pippa Middleton gets wed! Get inside the one of a kind royal reception 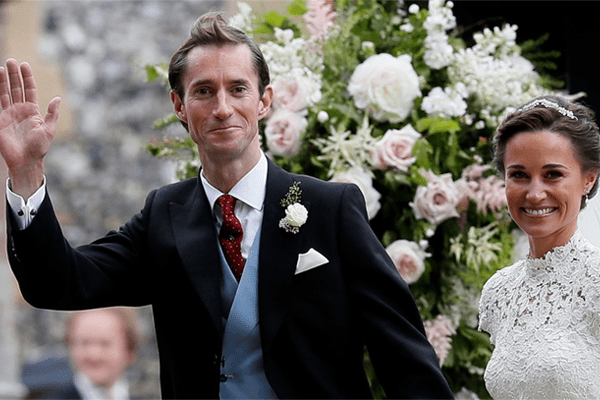 Kate Middleton’s sister, Pippa Middleton is married! Pippa Middleton married James Matthews in Englefield, England. Amidst the church bells, Pippa looked mesmerizing amidst 100 of her family and friend. Let us get into the details of this royal reception.

Pippa Middleton got married to businessman James Matthews on 21st May 2017, at St. Mark’s Church in Englefield, England. 100 friends and family were present in the church when the couple shared their vows and tied the knot.

The wedding looked extremely royal and elite with guests like Princess Eugenie, Roger Federer, Prince Harry, the entire Middleton family, Princess Charlotte, Prince George, and more. The guest looked classy and jolly in their colorful attire. Actress Meghan Markle who is known to be Prince Harry’s girlfriend was also seen in the wedding.

Pippa Middleton, 33 looked gorgeous in a seamless Giles Deacon dress. She wore a Stephen Jones veil and a Maidenhair Fern tiara stood flawlessly on her bun. Pippa wore a Manolo Blahnik ivory satin shoes. She entered the church with her father in a vintage 1951 Jaguar car.

James Matthews, 41, is an English millionaire who is a former racing driver, hedge fund manager and is also the heir to Laird of Glen Affric which is the Scottish courtesy title. The diamond engagement ring that James gave to Pippa Middleton is estimated to be worth 250000 pounds.

The newlyweds led the party to Pippa’s parents’ house in Bucklebury, a 16-acre estate holding 300 guests.

The post wedding bash was not as simple as the wedding and showed a wilder side to the guests and the newlyweds.

The guests were asked to gather at the Bucklebury Village Hall and asked to change to white shirts. The guests had to get their photo identification checked and confirm their special password. The passwords were given out three months earlier.

The wedding reception took to a £100,000 glass marquee in Middleton’s home that reportedly took three days to erect. Also, the reception gave way to a Supermarine Spitfire’s acrobatic aerial performance. The close family members and friends shared their speech at around 9: 30. Also, the after-party has a Beatles tribute with the Beatles’ cover of the Isley Brothers’ “Shout”!

The new couple wave goodbye as the drive off in a vintage car ?? #pippamiddleton #jamesmatthews