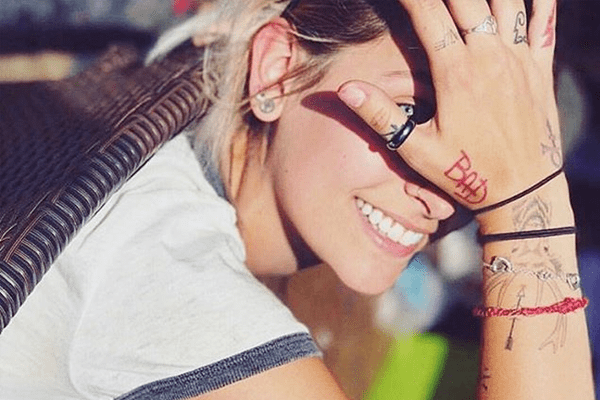 The 19-year-old Paris Jackson has got inked yet again but this time the tattoo honors her later father Michael Jackson. Paris Jackson’s new tattoo was displayed on her Instagram account this Friday. Let us check out Paris Jackson’ new tattoo dedicated to her late father!

What does Paris Jackson have to say about her new tattoo?

The 19-year-old actress, Paris Jackson is known best to be the daughter of the late king of pop, Michael Jackson. Paris Jackson, in the previous years, has talked a lot about her father and how much she misses him. Paris Jackson’s new tattoo is all about her dedication to her late father.

On Friday, Paris posted a picture on her Instagram account of her feet filled with tattoos. Among those tattoos was one of Paris Jackson’s new tattoo of “Apple Head” written on her left foot. The meaning of the Apple Head comes from the time when Michael Jackson was called “Apple Head” by his children and his fans. Paris captioned the picture “with every step I take, you lift my foot and guide me forward”. She added a “love you” along with the emoji of a green apple.

with every step i take, you lift my foot and guide me forward. love you ?

Paris Jackson and her tattoos

Paris is known to have more than 50 tattoos all over her body. She started getting inked at the age of 18 and has been coloring her body with tattoos since then. Thus it is totally sensible for her to have some tattoos to pay tribute to her legendary pop star father!

Paris Jackson’s new tattoo remembering her dad adds to other several tattoos dedicating him. She has inked her right hand with a “Bad” written in remembrance of Michael Jackson’s cover art from his album Dangerous. She has posted several pictures of her tattoos on her Instagram account.

Paris Jackson had already gained wide media coverage due to her later father but at present, she has been grabbing the attention of the tabloids for her on exceptionally growing career and her diligent personality.

More recently, Paris Jackson appeared on the cover of Vogue Australia. While in the interview with Vogue, she went public on her efforts to remain a positive role model for ambitious and aspiring young girls. Furthermore, Paris also talked about her career goals.

Paris Jackson’s new tattoo is definitely a reminder of her father for her and us as well!