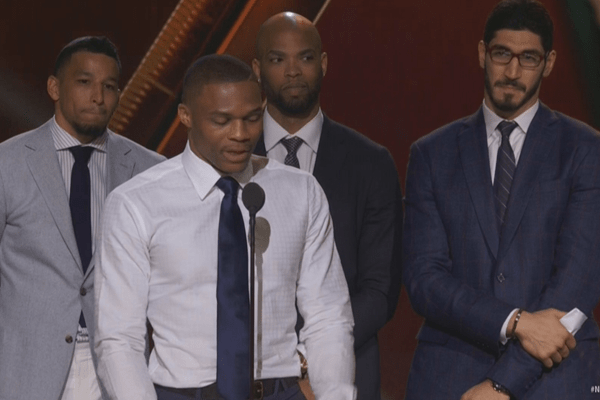 Picture Source: sbnation.com
The NBA Awards 2017 was recently aired on TNT this Monday and it has been an exciting journey to watch the players and rookies be honored for their contribution in the field of professional basketball. With show host, Drake and performers like Nicki Minaj, the event was a full starlit night! Let us get into the details of the NBA Awards 2017!

All about the star-studded event

Hip-hop artist Drake hosted the NBA Awards 2017 which made the night worth remembering. Artists like Nicki Minaj, 2 Chainz, Will Ferrell were there to perform for the wild crowd.  All the significant NBA stars were spotted at the event.

Who were the winners of NBA Awards 2017?

The Sager Strong Award was received by Monty Williams. The MVP Award was taken home by Russell Westbrook. To top of the event, Bill Russell was honored with the lifetime achievement award!

The award as per the media votes saw some exceptional players win. Russell Westbrook of the Oklahoma City Thunder became the NBA Most Valuable Player, Malcolm Brogdon of Milwaukee Bucks won the NBA Rookie of the Year. NBA Most Improved Player and NBA Defensive Player of the Year was awarded to Giannis Antetokounmpo and Draymond Green respectively. NBA Coach of the Year was awarded to the Houston Rockets’ Mike D’Antoni.

The Golden States Warriors’ Bob Myers was named the NBA Basketball Executive of the Year.

Russell Westbrook is known to have won the maximum awards with his final award being for Best Style. The Best Playoff Moment was between Kevin Durant of Golden State Warriors’ versus Cleveland Cavaliers during the Game 3 of the finals. The Block of the Year was given to the San Antonio Spurs’ Kawhi Leonard vs. Houston Rockets.

The special NBA Awards honors fell on the hand of Carrie Berman of Eagan, Minn for the Jr. NBA Coach of the Year, Patrick Beverley of the Huston Rockets for Hustle Stats Awards.

The well-deserved NBA players have become the winners of the NBA Awards 2017!


Kawhi Leonard wins the fan vote for Block of the Year! NBAAwards pic.twitter.com/7mlec8e1X4

Kawhi Leonard wins the fan vote for Block of the Year! NBAAwards pic.twitter.com/7mlec8e1X4