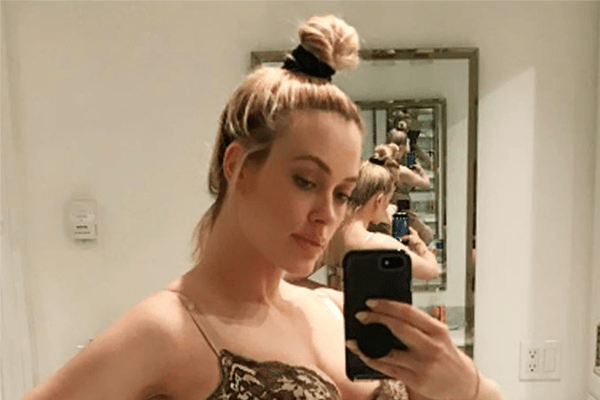 To be a toned athlete with a blog about fitness is incredibly difficult to keep up with. Peta Murgatroyd is hitting the gym hard weeks before her wedding with Maksim Chmerkovskiy. Peta Murgatroyd gave birth to a baby only 5 months ago and now is getting ready to fit in her wedding dress.

4 weeks ago….Mum back in the gym, getting it with @timhartwigtrain. Shredding for the wedding! ☺️ Would you guys like to see more fitness content on @allthingsfamandglam? #fitmom #workingmom

In an interview with E! News, Peta Murgatroyd reveals her wedding plans and her intense workout schedule. Peta revealed that she is having some “wedding stress” but is sure that it will eventually work out. Maksim jokingly added that he just “adds to the stress”!

Peta shared that her wedding dress is still is “Paris” and that she is “waiting for it to be shipped back”! Peta and Maksim decided during the interview that the couple does not actually know where Maksim’s “stuff” is!

Since Peta is now a mother, Maksim revealed that the upcoming mother’s day is a “big deal”! Maksim shared that Peta is “motherly”, “sensual”, and “feminine”.

The 30 years old, Peta Murgatroyd shared trough her Instagram account her workout process. Peta posted a snap during her workout while holding her new-born. She captioned, “Mum getting after it in the gym with some special helpers…” and added “Working hard for that wedding body!”

Mum getting after it in the gym with some special helpers – Shai, @maksimc, and the amazing @timhartwigtrain. Working hard for that wedding body! ? #workingmom #fitnessmom

Peta is working out with her trainer Tim Hartwig who works with athletes in Los Angeles. In an interview with E! News, Hartwig spoke about the techniques used by Peta for her workout. He revealed that the techniques are similar to that used by footballer Rashad Jennings before his season starts.

Tim Hartwig revealed that she is limiting her consumption of alcohol these days and she eats three meals a day and two snacks to “stimulate the metabolism” since “eating more is beneficial”! About Peta, he shared that they are “focusing on is eliminating the scale” and that Peta has not weighed herself throughout the training time.

Peta Murgatroyd does not look like she had been pregnant a few months ago. The avid fitness freak, Peta has her Peta Jane tanning products which are most likely to be seen used during her product.