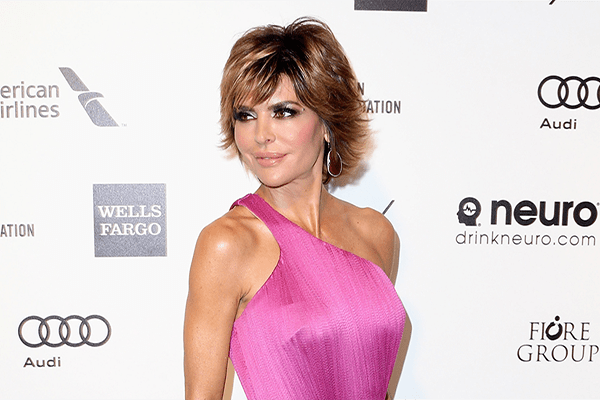 We might be well aware of plastic surgeries inside the Hollywood arena. The famous American beauty, Lisa Rinna gained wide prominence after she admitted to having multiple lip injections and breast implants. However, recently in an interview with Andy Cohen, the Days of Our Lives actress, Lisa Rinna when asked about further lip injections, denied with a simple ‘No’!

During an interview with the Real Housewives of Beverly Hills’ star, Lisa Rinna, the host Andy Cohen asked questions regarding her plastic surgery. He remarked that Rinna’s lips looked fuller and ‘plumpy’. Although Lisa has revealed her previous lip injections and breast augmentation, she clearly denied this one. She dodged the question with a “No, No” followed by, “It goes up and down, you know that!”

Also in a tweeter question regarding her perky breasts which looked significantly larger, Rinna denied having breast augmentation but instead responded that she has the pads in which were pushing them up. Furthermore, she responded “It’s an illusion. I can do many things with this body.” And we totally agree with her!

Rinna had her first lip injection at 24 years of age and at present she finds the decision very stupid. She got her lips done along with her best friend. More recently she had it removed because, allegedly it got hard and gross. Despite it all, she does not regret having pumped her lips. She joked that she felt like a ‘pioneer’ and that her lips had a career of their own.

If after many plastic surgeries, silicone, botox and Juvederm injections, Rinna feels satisfied and happy with her body, then she totally deserves it! She can do whatever she likes with her body without getting judged.

Rinna looks more in shape at the age of 53 than she was ever before. The mother of two looks younger than most of the people her age. Is it all because of plastic surgery? How much plastic surgery has the American beauty taken over the span of time?

How much more plastic surgery will follow in Rinna’s life? Is it for better or for worse? We are yet to find out! We hope that after all the plastic surgery, Lisa Rinna feels good about her body!

Tonight at 2am ET on QVC - One hour of the Lisa Rinna Collection with PrinceEricPagan. Everything in the show will be clearance priced! pic.twitter.com/qMEGf478GK

Tonight at 2am ET on QVC - One hour of the Lisa Rinna Collection with PrinceEricPagan. Everything in the show will be clearance priced! pic.twitter.com/qMEGf478GK