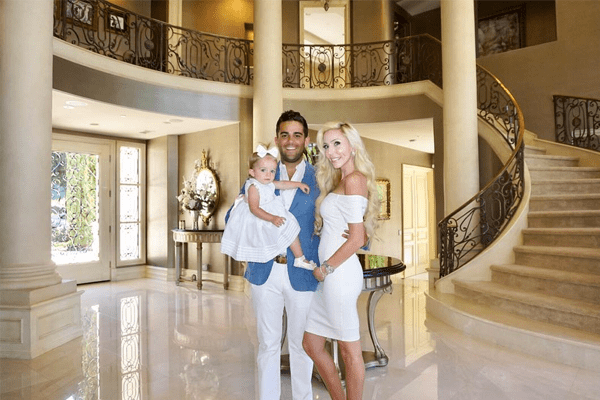 It has now been official that Laguna Beach’s Casey Reinhardt is pregnant. The owner of Casey’s Cupcakes has taken to Instagram to reveal some major news about her personal life. Casey shared through social media that she is expecting her second baby with her husband Sean Brown.

She posted an adorable picture of her husband, herself and her little baby daughter and wrote that the entire family is “thrilled to finally announce that angel baby number two” shall be joining the adorable family in January. Casey Reinhart shared that she and her husband are “excited” for the new addition to the family and that they feel “incredibly blessed!!”.

Sean, Kensington, and I are sooooo thrilled to finally announce that angel baby number two will be joining our family in January!! We are beyond excited for our new precious addition and we feel so incredibly blessed!! #BabyBrownNumberTwo #January2018 #15weekspregnant #TwoBabiesUnderTwo #LifeisSoGood #soakingupeverysecond ????????

The revelation has particularly been a delight to her friends and family along with her fans. To congratulate them on the news were Casey’s friends Lydia McLaughlin and Kara Keough Bosworth from the Real Housewives of Orange County.

Casey is the successful owner of Casey’s cupcakes and is also an entrepreneur along with the TV reality star for Laguna Beach.

Casey Reinhart got engaged to husband Sean Brown on 12th August 2015. They went on to get married in February 2016. The couple then welcomed their daughter Kensington Kelly Brown in August 2016. Casey Reinhart and Sean Brown recently posted in the excitement that their daughter was soon going to celebrate their first birthday. In the Instagram post, Casey shared that this year had been the “best year” of her life and that she loves being Kensington’s mother.

Casey is very vocal and open about her personal life and has been sharing many pictures of her family particularly her daughter. So it is clear that her fans will get to hear and see a lot more about Casey’s pregnancy from her social media disclosures.

Casey Reinhardt is pregnant and her fans are super excited about the news. We wish all the best for the growing and successful family’s well-being!