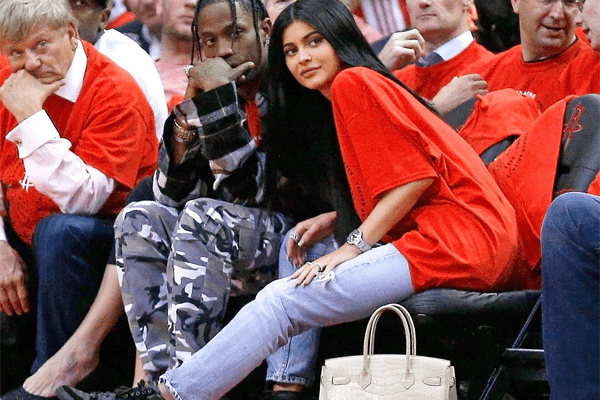 Kylie Jenner has eventually gone down from the picture of Hollywood drama ever since the reports of her pregnancy arose. While her gradual disappearance from Hollywood is pretty obvious, her fans have been stalking her social media accounts to find Kylie enjoying at home. Kylie Jenner’s pregnancy has been going smoothly as she has been posting pictures of herself spending most of her time being a low key celebrity soon-to-be-mom. Let us get into the details of Kylie Jenner’s pregnancy!las

Kylie Jenner is no longer the hot trending topic anymore in the Hollywood scene. Jenner has also gradually made her social media appearances low. It is time for Halloween which is the prime time for celebrities to show off their creativity and show themselves off lavishly.

But, it seems not to be the case for Kylie Jenner since she has been covering herself this Halloween.

I made her FaceTime my whole family .. fooled everyone ??

Reports about Kylie Jenner’s pregnancy arose more than 2months earlier. Kylie is pregnant with her boyfriend Travis Scott’s baby. The 20-year-old Keeping up with the Kardashian star is lying low this holiday season since she is carrying a baby bump around.

Kylie seems to be having a relaxed Holiday this year. She posted a Snapchat of herself wearing comfy clothes. In other cases, Kylie would wear revealing clothes showing off her assets how and where possible. But this Halloween is different and probably better for Jenner.

She seems relaxed and has no pressure to surprise and satisfy her fans. On Sunday, Kylie posted pictures with her mother, Kris Jenner and she also used the puppy filter.  Also in an array of snaps, she posted a box of her new favorite snack, Chow Down which Kris brought her from Colorado. Kylie also posted a picture of her flashy elastic leather pants falling under her Rolls Royce wheels. Kylie also posted pictures of her uber-expensive cars

Kylie has not officially commented about her pregnancy report but no one can deny how truthful it is since the once-Hollywood queen is now covering herself up and staying mostly at home.

Over the years, Kylie has mostly fascinated us with her awesome clothing in Halloween. She rocked a genuine leather jacket in the Universal Studio’s Halloween Horror Nights in 2014 and looked smashing hot while showing off her abs in a badass Ninja warrior dress in 2015. Also, she dressed as a snow princess in 2015. In 2016 she dressed up as iconic Xtina.