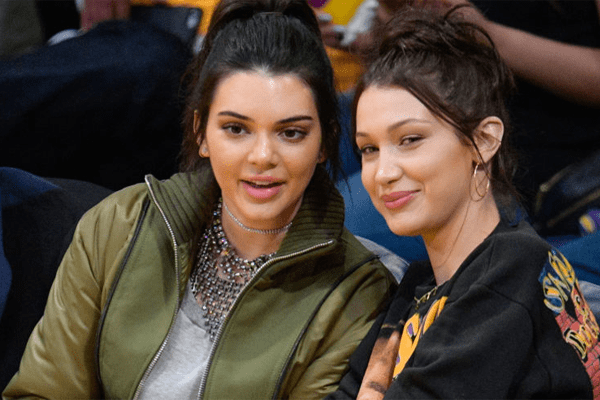 Kendall and Bella looked chic and lux in their own attires. Kendall had worn a cosy-looking white Burberry couture cape and white dress. While Bella looked classy and fierce in her sexy black wrap around dress. Bella looked all black and shiny with her black hair, black dress, and the thigh-high black boots.

Kendall not only looked sexy, she also looked super cool with a golden tooth. Among the guests on the night were singer and model Justine Skye and Stella Maxwell, Lily Donaldson, singer Ellie Goulding, Daisy Lowe, Alice Dellal, Lottie Moss, Rafferty Law, Nick Grimshaw and more. All the stars looked uber fashionable in their attires.

While Ellie Goulding wore a low cut short Black dress, Zoe Blue appeared to be wearing a dress with feathers attached to the ends in a fashionable stance. Daisy Lowe wore a silky dress with nets on the bottom and the top while Gwendoline Christi rocked a low-cut slit black dress that accentuated her thighs.

Justin Skye looked equally glamorous in her skin tight dress that showed off her slender legs and the sides of her abdomen. She had topped the dressed in a baby pink featured coat that looked super cozy.

Bella Hadid displayed her love for Kendall in her Instagram account by posting a goofy picture of Kendall and captioning it ‘Best Friends for Life’. The girls seemed to be having too much fun together with their other friends.

On camera, we could see Kendall having the time of her life by laughing and talking to her friends. Bella and Kendall took some steamy and some goofy pictures. It seems like the two have been spending a lot of time together. They were recently seen in the Box night club after stuffing themselves at restaurant Sexy Fish.

Bella Hadid and Kendall Jenner sure know how to party hard. After her recent breakup and the scandals that followed Bella seems to be finally recovering. The supermodels have been seen in London since the fashion shows began last week.

I&39;m excited about this one :) Live for now. See more of my ad with Pepsi next week PepsiMoment ad pic.twitter.com/uEWqKDstyK

I&39;m excited about this one :) Live for now. See more of my ad with Pepsi next week PepsiMoment ad pic.twitter.com/uEWqKDstyK