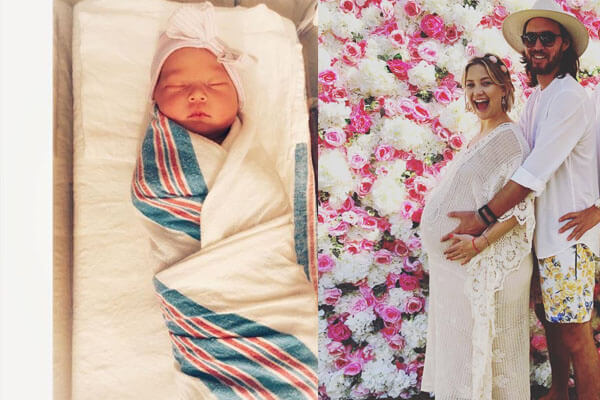 Kate Hudson, welcomed her beautiful daughter, Rani whom she shares with her boyfriend Danny Fujikawa on October 2, 2018. And on Saturday, October 6, she shared the first photo of her baby girl via Instagram.

The Almost Famous star, 39, captioned her picture, ‘Our little Rosebud.’

Kate Hudson’s daughter Rani indeed looked like a rosebud, wrapped up in a hospital blanket, and the striped pink bow.

Kate had announced her baby girl’s arrival via Instagram on October 3 with caption, ‘She’s here.’ She also mentioned that the couple have decided to name their  little girl’s name Rani after her grandfather. His name was Ron Fujikawa. Kate added that Ron was the most special person and they all miss him dearly. To name their kid after her was an honor.

The Fabletics Founder had been keeping her fans updated about her happiness since April. Through her Instagram post, Kate surprised her fans saying that she’s expecting a baby girl.

The How to lose a guy in 10 days actress added that she had not been on her social channel for long because she had never been more sick. She added,

It was the most sick first trimester of all her children.

Danny, her kids and everyone were very excited because their daughter was on her way.

Kate Hudson is already a mother of two sons. With her ex-husband Chris Robinson, she gave birth to her first son, Ryder who is 14 years old now. And Bingham,6, is her second son from ex-fiance, Matthew Bellamy.

US Weekly shared that an insider source said in April that Kate had prayed and wished a lot to be a mother of a baby girl. As soon as she met Danny, her current boyfriend, she thought to have a baby girl with him. Danny also had been very good with her kids.

Danny,32, and Kate had known each other for fifteen years. However, they started dating since December 2016. One can say that they are really serious about each other and have welcomed their baby girl in the world too.

Be with us for for news, entertainment updates.