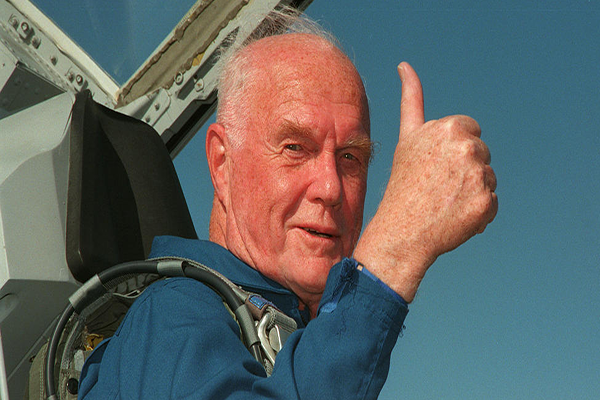 The exceptional American aviator, engineer, astronaut, and the United States Senator from Ohio, John Glenn has passed away on 8th December 2016 aged 95. Glenn has not only served the senate of United States but is also noted for being the first American to orbit the Earth as an astronaut.

He is best known to many as the first American man to orbit the Earth. He circled it three times. However, there is much more to John Glenn. He was a jewel to America. Before working for NASA, John Glenn was a Marine Corps fighter pilot in World War II. Glenn is also known to be the oldest human t set a transcontinental speed record at the age of 77.

John Glenn ran for the U.S. Senate of Ohio and won in 1974. He has served the Senate for 24 years from Ohio. Glenn was a member of the Democratic Party. His years in office ended on 3rd January 1999. Furthermore, John Glenn has been noted for being the oldest person to fly in space as a crew member of the Discovery space shuttle. He is the only person to fly in the Mercury and Space Shuttle programs.

After being hospitalized for a number of weeks, at the James Cancer Hospital at the Ohio State University he passed away silently on 8th December 2016. The cause of his death has not been disclosed yet. He had a heart valve replacement surgery in 2014. His health was not so good since a few years.

After the death of John Glenn, fundraisers have grouped to build an observatory and astronomy park named after him at a state park in Ohio. The proposal is presented by the nonprofit Friends of Hocking Hills State Park. Their estimated budget for the project is $1.6 million and they have already received half of the amount.

John Glenn has inspired a century of American people through his works and will continue to do the same through the values he has left. The passing of John Glenn has been a sad event for the United States and the entire world. John Glenn has made huge contributions in the field of astronomy, science as well as the politics of United Stets. 2016 has taken from us many legends and John Glenn stands as one among them. We will miss him dearly.