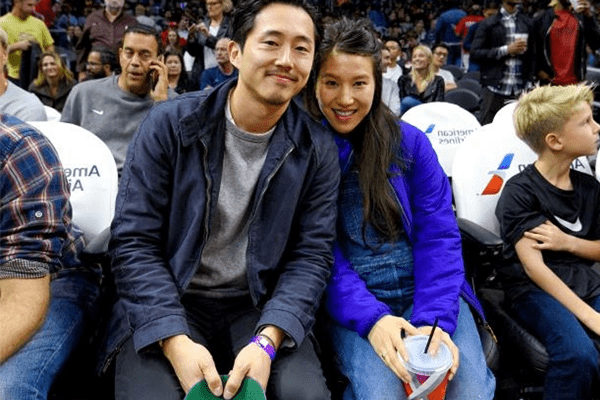 The Walking Dead Star Steve Yeun is officially a dad! Steven Yeun and his cute wife, Joana Pak have given birth to an adorable baby boy on 17th March. The family of 3 looks healthy and very much delighted at the birth of their first child. Let us find out more!

On 17th March as per the report of e! News, the Walking dead Star Steven Yeun and his wife Joana Pak gave birth to a baby boy.

Joana Pak revealed that she was pregnant in December. The couple had only been married for a few days! In February after the news of Joana’s pregnancy was out, the couple shared a series of photo booth pictures of themselves in adorable poses with Joana showing off her baby bump.

Joana Pak and Steven Yeun got married on 3rd December, 2016 in Paramour Estate, Los Angeles. The couple had been dating for more than a year. Yeun revealed in Martha Stewart Weddings that he had met Pak in a bar where he was a “really shitty bartender”. Since then Pak and Yeun met each day for six months until they fell deeply in love.

congrats @steveyeun on your beautiful wedding!! miss you #thewalkingdead

Now the family has grown to be three only after a year of married life!

Steven Yeun has been busy with his work as an actor in Voltron: Legendary Defender, Trollhunters. He will soon be seen in many of 2017 post production movies like Okja, The Star, and Chew. Steven Yeun has gained wide recognition for his role in The Walking Dead as the character Glenn which he played fascinatingly well.

On the other hand, Joana Pak who is a photographer, has also been triumphant in her field of work. The couple has been doing great in their professional life and now the birth of the baby is a sign that