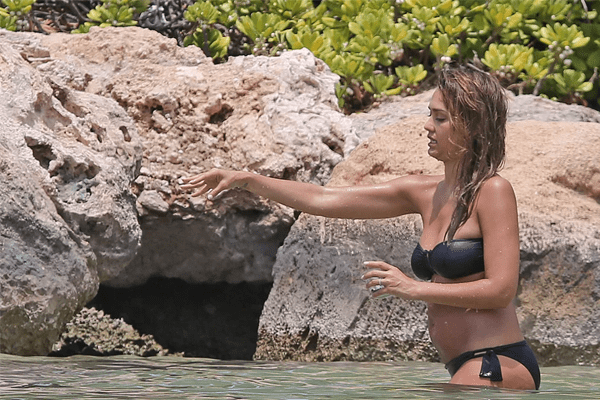 Photo Source: popsugar.com
Jessica Alba lavishly shows off her baby bump while still rocking a bikini at the beach in Hawaii on Saturday. Alba has been pregnant for a while now but it has not stopped her from going out in public and displaying her true self. Let us get into the details of Jessica Alba’s growing belly and her sexy attire under the sun on Saturday.

The 36-year-old Jessica Alba sure knows how to enjoy herself without being distracted by onlookers. Alba announced her pregnancy last week. But it is not the first time that Jessica Alba’s growing belly has been caught on camera. Alba already has two lovely children and she is waiting for her third.

Jessica Alba looks younger than ever even after having two children and an upcoming child in her belly. She does not look as sick as other pregnant ladies. Alba is known to be an avid practitioner of yoga and exercise. This might be the reason for her youth and stance.

Jessica Alba’s growing belly made its debut this Saturday when she was spotted on a beach in Hawaii along with her husband Cash Warren and their two children. Jessica Alba was spotted soaking up some vitamin D while relaxing in the water with her children.

Jessica Alba’s growing belly looked sexy. She was wearing a black bikini top with a scoop ring and bandeau cut by Eres. Jessica opted for a simple bikini look but still managed to look hot and sexy. Jessica Alba is a huge style icon when it comes to the holiday season and bikinis. Alba’s body looked toned up and it seemed that she has still been following her daily workout routine.

Jessica Alba is married to film producer Cash Warren. Cash Warren is the son of the actor Michael Warren. Jessica met Cash while she was filming Fantastic Four. The already divorced Alba went on to fall in love with Warren over the time. The couple went on to get married on May 2008. Together, the couple has two daughters named Honor Marie Warren born on 2008 and even Garner Warren born in 2011.

The love between the couple has kept on growing over the years and the proof of their love are their children. We wish the best for the lovely couple and the good health of their unborn baby!