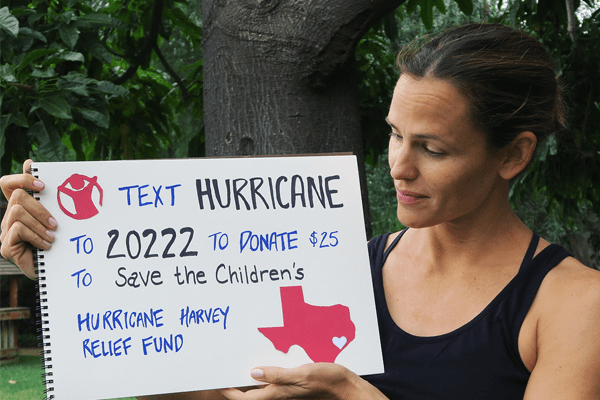 Her visit and her meeting with the children, their family, listening their experience really moved her and she shared her experience and photos in her Instagram giving a touching message to all.

She expressed that she was really inspired by the huge hearts in Texas. The way people came together in a time of crisis. And the most beautiful part was that the children looked for light.

Jennifer Garner added that in spite of the most terrifying things that have happened to those kids in the past couple of weeks, they didn’t want to dwell on those stories. They were happier to tell you that their neighbor’s puppy was found.  They were happy and relieved that they saved their mother’s life by throwing her a rope when the flood water overcame her and now she’s ok. And they all celebrated when power came back on.

Today I was inspired by the huge hearts in Texas. There is a generosity of spirit that gets lost in political rhetoric, but– people come together in a time of crisis. You know what’s beautiful? Children look for light. Terrifying things have happened to these kids in the past couple of weeks, but they don’t want to dwell on those stories. They want to tell you that their neighbor’s puppy was found. That they saved their mother’s life by throwing her a rope when the flood water overcame her and now she’s ok. That they all celebrated when power came back on. We have to protect our kids and we have to learn from them.

Jennifer Garner have been on save the Children’s Board of Trustees for nine years. She had been contributing immensely by raising voice for the healthy start of every children’s life.

She once said “I grew up – as I have often told people – one generation and one holler removed from poverty. I knew children in my own school who had to cut holes in the toes of their shoes because they couldn’t afford to buy new ones. Children who didn’t move from first to second grade, when I did. Children who eventually disappeared altogether. I couldn’t stand up for them back then. But I can stand up for their families now.”

As per the press release of the organization, Save the Children has been working as the national leader in helping restore child care and early education centers after emergencies, and helped lead such efforts in Texas in 2008 in the aftermath of Hurricane Ike and in New Jersey and New York in 2012 in the wake of Hurricane Sandy.

Along with Jennifer Garner, many celebrities have been visiting or providing a helping hand through donation to the Hurricane Harvey victims. Some of the names are Leonardo Dicaprio, Pink, Sandra Bullock, Jensen Ackles, Kevin Hart, JJ Watt, Leann Rimes, Hilary Duff, Jennifer Lopez & Alex Rodriguez, Ellen Degeneres, Chris Young and many more.

The devastation in #Texas continues to grow and my friends @savethechildren are hard at work helping keep kids affected by #hurricaneharvey safe. You can help us reach families in need by texting HURRICANE to 20222 to donate $25 to the efforts. Thank you for the support!