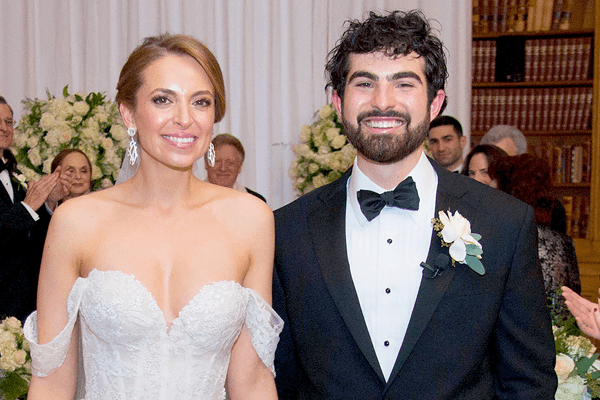 Jedediah Bila is officially married to her fiance, Jeremy Scher.

The newly married couple tied the knot on Saturday(February 17, 2018) in Huntington.

The Emmy-nominated TV host Jedediah Bila exclusively shared her excitement with the US magazine on the wedding saying;

“I’m super excited. I always wanted to be married, but I never thought I would do the big wedding dress and the beautiful venue. I always thought I was going be on a beach somewhere, just a couple of friends, doing it really casual. So it’s crazy.”

Bride Bila dressed in a beautiful Rivini Lace ballgown and earrings gifted from Susan Hanover for the ceremony held in front of sixty guests.

The venue was filled with garden roses and hydrangea, and the dinner included filet mignon and seared Atlantic salmon. The grand wedding cake was a customized vanilla and chocolate cake with mousse filling.

In June 2017, Jedediah had announced the news of her engagement to boyfriend Jeremy on the show The View.

WEDDING BELLS!? @JedediahBila had a busy weekend — she got engaged to her boyfriend Jeremy! Congrats you two — wish you the best! ? pic.twitter.com/YWmJ3YEf7K

Jedediah posted a very sweet picture via Instagram of her boyfriend kneeling down and proposing her. Her caption reads: She said yes.

The Couple had met in an active gym session when they used to live on same streets. Surprisingly, the lovebirds had the same trainer at that time and started having casual chattings which encouraged Jeremy to ask her out.