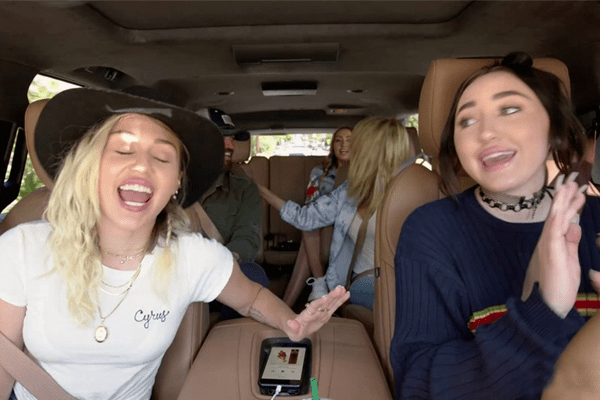 Photo Source: usmagazine.com
Carpool Karaoke is one of the best things a comedian has ever brought in the entertainment arena, all thanks to James Corden. However, n this New Carpool Karaoke trailer, we don’t see James Corden in his driver’s seat. Instead, we are graced with the presence of a bunch of celebrities like Miley Cyrus, Jessica Alba, Noah Cyrus, Gwyneth Paltrow, and more. Let us dig into the details of this melodious ride!

Carpool Karaoke: The Series is soon going to be released and its trailer already has us all excited. On Tuesday, August 8, we will see the debut of The Late Late Show With James Corden spin-off. The one minute trailer is out and it shows a bunch of unusually interesting pairings.

The one minute trailer begins with Willie Nelson’s “On the Road Again” and shows some pairs of celebrities while James Corden himself is seen in only a few pairings.

Miley Cyrus and her family are one of the pairs, while Gwyneth Paltrow and Jessica Alba are also seen as one of the oddest pair singing along. Some of the celebrities seen in the trailer together are Ariana Grande and Seth MacFarlane, Chelsea Handler and Blake Shelton, John Cena and Shaquille O’Neal, and more.

The previous Carpool Karaoke trailer saw weird pairings like Billy Eichner and Metallica taking over a supermarket, John Cena and ‘Neal working in the bakery, and more.

The Carpool Karaoke trailer sees the car running on the streets of L.A. Also the trailer shows a glimpse of Will Smith crashing a wedding. Sophie Turner and Maisie Williams are seen taking a ride on a mechanical dragon. We also see John Legend enjoying with a choir.

The first Carpool Karaoke saw James Corden take George Michael back in the UK for the Red Nose Day back in 2011. When James Corden began his Late Late Show in 2015, he made sure to include this segment every week as well.

Since then we have been graced with the remarkable Carpool Karaoke from celebrity guests like Adele, Michelle Obama, Mariah Carey, Britney Spears, Madonna, Shakira, and more. It is also reported by Us Weekly that in the upcoming episode of Carpool Karaoke: The Series we will also get to see a posthumous appearance by the late singer Chester Bennington.