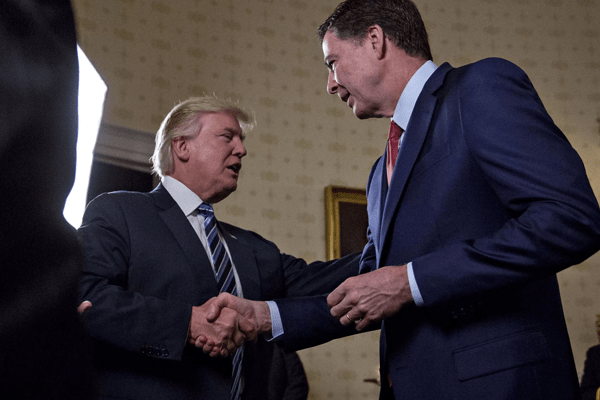 After 4 months of being fired by Donald Trump on Twitter, former FBI director James Comey gave his first interview since the firing. Speaking to  ABC News’ George Stephanopoulos, the former FBI chief wasted no time in criticizing President Trump and made some shocking revelations.

Comey claimed that President Trump was “morally unfit” to be the president of the United States. He called Trump a liar and further made claims that Trump treats women “like a piece of meat”. He also shed light on the Hilary Clinton e-mail investigation and said he wouldn’t change the way he handled the investigation.

Let us break down what he said in his interview:

His first meeting with Trump

He said when he met Trump for the first time in January 2017, he was very nervous. He said “I’m meeting the president-elect I don’t know and from what I saw in the election campaign, could have been volatile.”

Comey was impressed with Trump on a physical level though. According to Comey, Trump carried himself pretty well. What did surprise Comey though was how the meeting went. “It was like a Mafia head talking to his family. We were all seated and he was the boss telling us what to do.”

How and why he got fired?

Comey said that he had to find out that he was fired on the television while in the FBI field office in LA. “I was numb. I couldn’t believe what I had just heard.”, he said. He said he gave a speech to the staff after hearing the news.

Comey said “Of all the things said on the media about me being disliked by the other staff and FBI being in tatters, they are all lies. Made up by the Trump administration to justify firing me.”

He also said that the now Trump’s chief of staff John Kelly got so mad that he wanted to resign too but Comey convinced him not to.

He also criticized Obama for mishandling the situation. He said” He did handle it very well, he should have done better.”

Why is Trump Unfit to be President?

Comey said Trump was morally unfit to be president because Trump is “a dishonest man who treats women like meat and lies about big and small things.”

Trump was quick to respond on twitter calling Comey the worst FBI director ever.

Slippery James Comey, a man who always ends up badly and out of whack (he is not smart!), will go down as the WORST FBI Director in history, by far!