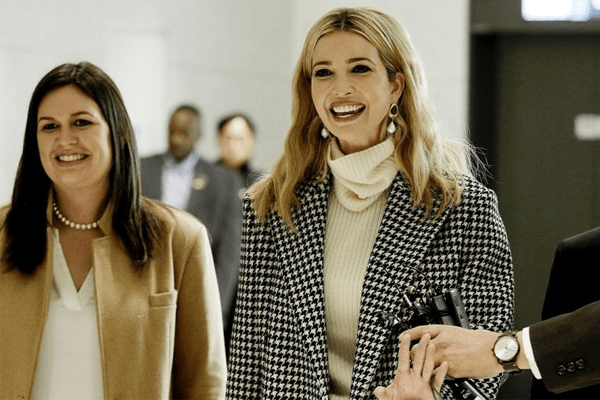 Ivanka Trump is recently in South Korea to represent Unites States in the closing ceremony of Winter Olympics. She is representing U.S and after that she will have dinner with South Korean president Moon Jae-in in his Residence.

But as always, Trump family in in the middle of controversy. People are raising questions all over and twitter is flooded with the question

Why First Daughter Ivanka Trump is representing U.S? She is not even elected.

I just saw where Ivanka is going to South Korea to lead the American Team in he closing ceremony ……..The Question is WHY ???? What gives her the right to Lead anyone ……..#TheResistance

Congratulations to @TeamUSA #WomensHockey for an incredible win – the first GOLD in 20 years. This team shows us what we can achieve when we work together, never give up, never give in, and ALWAYS believe in ourselves and in each other. #USAvsCAN See you in #PyeongChang tomorrow!

Ultimate participation award goes to…Ivanka Trump! Daddy is gonna let her pretend to be an Olympian for the closing ceremony. Yaaaay!

Why the hell is @IvankaTrump leading the #usolympic team at the closing ceremony?  How embarrassing. pic.twitter.com/KEwpWaz2Nk

Not sure why you are our representative for the closing ceremonies.  You were not elected.

Many are guessing that Donald Trump had sent Ivanka to overshadow the little sister of Kim Jong Un, who overshadowed U.S Vice-President Mike Pence. May be this is Donald Trump idea to go head to head with Kim Jong Un in every way possible.

Similarly, in opening ceremony Vice President Mike Pence himself was criticized for his intolerance over LGBTQ community by Gus Kenworthy and Adam Rippon who are the gay athlete from Team USA.