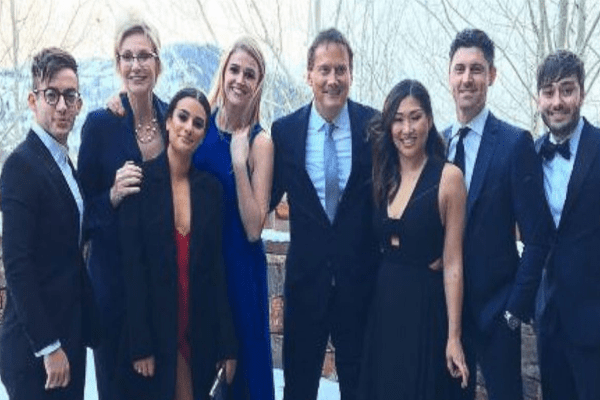 The blonde actress, singer and dancer, Becca Tobin tied the knot with hubby, Zach Martin on 3rd of December this year. Becca who portrays the role of a cheerleader and glee member in the Fox’s TV series Glee was previously in a relationship with her boyfriend Matt Bendik. Alas, the relationship got shadowed by Bendik’s sudden and mysterious death. With a heavy heart she had to say goodbye to her boyfriend Bendik in July 2014 who was found dead and lying in a Philadelphia hotel. Despite the tragedy, Becca moved on and it seems she is getting what she deserves. A bigger and brighter future with beau Martin!

Martin proposed Tobin to get engaged in May 2016. Tobin revealed shortly that Martin had slipped the proposed during her LadyGaga podcast. However, she took some wise time and decision to publicize the news. Becca Tobin accepted the proposal and flaunted her ring in social media sites. Her fans have been long waiting for this day as much as her. The two stepped into the altar at the Amangani in Jackson Hole, Wyoming. Becca donned a glamorous Odylyne the Ceremony gown.

Among the attendees were notably her glee cast members, Lea Michele, Jane Lynch, Kevin McHale, Jenna Ushkowitz, Meg Doyle, Michael Hitchcock and her other friends and family. It was certainly a glee-studded night. Becca Tobin’s boyfriend, now hubby, Matt Bendik is an entrepreneur.

The lavish wedding was also noted many times in the social media sites. Lea Michele shared pictures of the extravagant wedding venue while sporting an elegant red dress. Kevin McHale shared a video of him eating the wedding donuts which were switched as the wedding cake because the couple is obsessed with doughnuts! Yes, how exciting! They went bonkers with the wedding desserts.

All the attendees seem to be happy and delighted to see their lovely friend getting married. The winter weather was filled with warm wishes, chic clothing, finger licking delights and a glee environment. We hope their time together is filled with glee in the years to come.