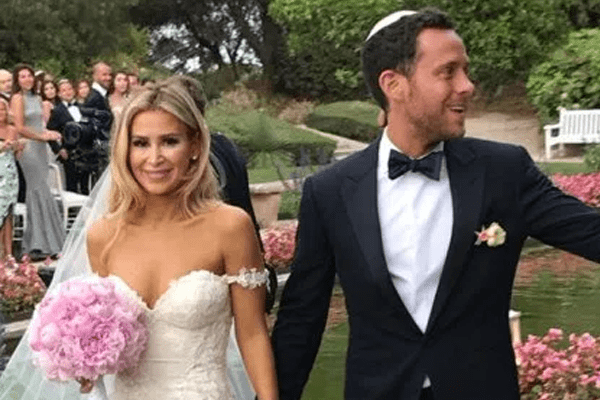 Photo Source: people.com
David Parnes of Million Dollar Listing Los Angeles is married to his wife Adrian Abnosi. The couple tied the knot in an extravagant ceremony held at the Villa Ephrussi de Rothschild in Saint-Jean-Cap-Ferrat in France. Let us get into the details of David Parnes and Adrian Abnosi’s marriage!

The event was filled with celebrities. Kyle Richards of The Real Housewives of Beverly Hills captured David Parnes and Adrian Abnosi’s marriage ceremony and posted it on social media site.

The bride and groom looked exceptionally attractive and picture perfect. Adrian Abnosi looked like a walking diva in her off-the-shoulder, trumpet-cut wedding gown. She, however, chose a simple and traditional veil and pulled off the angelic look. The groom, David Parnes looked dashing in his all black suit with a black bow tie.

David Pares and Adrian Abnosi’s marriage was a site worth viewing and appreciating.

David Parnes and Adrian Abnosi met Cecconi’s in West Hollywood. David had revealed that he was instantly attracted to Adrian. Parnes has been very vocal about their relationship from the very beginning. He shared with E! News, that he was very “lucky” to have found his “soul mate”. He furthermore added in the interview that Adrian was “everything” to her.

David Parnes shared that he had “promise to her father” to take care of her. He revealed that he wanted Adrian’s family to know what she meant to him.

Not only does David gush about his relationship with Adrian Abnosi, but Abnosi herself has been very supportive and appreciative of their relationship. Adrian added that she had met David only weeks after her mother had succumbed to cancer. She shared that it is “truly unbelievable”, the “amount of light and love” he brought to her life.

Parnes’ proposal to Adrian in Capri, Italy was exclusively reported by E! News in September 2015. Adrian and David had been dating for two years. Parnes romantically proposed to Adrian with a Lorraine Schwartz designed 4-carat cushion-cut diamond.

Now the couple is finally united by their vows and holy matrimonial. We wish a happy married life to the wonderful and adorable couple!