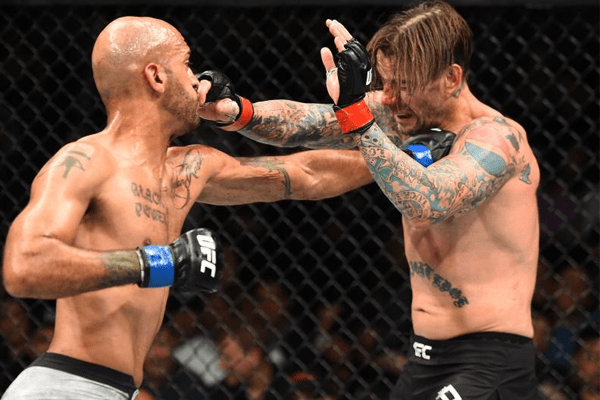 Former WWE star turned mixed martial artist CM Punk lost his second straight fight in the UFC, losing to Mike Jackson via unanimous decision at UFC 225. A crushing defeat here has led to people questioning if Punk’s UFC career, or even his entire MMA career, might be over.

The former WWE champion Punk, fighting in front of his hometown in Chicago, started off well in the bout, landing a right hand and forcing Jackson against the wall. Punk took him to the ground and landed some strikes as he held his own in the first round.

ON THE ATTACK!@CMPunk shows the aggression early on PPV. #UFC225 pic.twitter.com/uV75aycNkd

But as soon as the second round started, things went south for Punk as Mike took control of the bout, landing a right hand before taking Punk to the ground, landing solid ground strikes. For the final two minutes, Mike kept battering Punk. Though he was unable to finish Punk, he won convincingly with a unanimous decision of  30-26, 30-26,30-26.

Punk has now lost both his UFC Fights as he lost his first fight back in September 2016 against Mickey Gall at UFC 203. That fight was utterly one-sided as well, with Gall making Punk tap-out in just over 2 minutes of the 1st round.

With back to back losses, that too convincingly, it leads us to ask the question if Punk’s UFC, or his entire MMA career, might just be over. These losses have destroyed his career and there may be no way to rejuvenate it.

People blasted Punk and were quick to note that Punk shouldn’t be returning to the octagon again. People criticized Mike Jackson as well for stalling and not finishing Punk off.

Jackson is literally punching Punk while not even looking #UFC225

MMA is not for CM Punk. Or Mike Jackson for that matter.

Questions can be raised towards UFC for signing Punk, who had zero fighting prowess, but it can’t be denied that Punk is a superstar. The “CM Punk” chants at the start of the bout is a proof of that. UFC looking to capitalize on it is understandable, but his inability to hold his own in the octagon means UFC should not be granting him another fight in the future.

Punk is a former WWE champion who had a successful run in WWE but left in 2014 after citing creative differences and misdiagnosed illness. WWE’s doctor Chris Aman sued Punk for his comments that Aman misdiagnosed Punk’s staph infection, but Punk won the legal battle.

While Punk has insisted that he is done with wrestling, he is set to appear at the Pro Wrestling Tees meet and greet on August 31 later this year. This could mean he could return to wrestling in the future.