Home / So damn happy! Chrissy Teigen announces being pregnant with the second baby

So damn happy! Chrissy Teigen announces being pregnant with the second baby 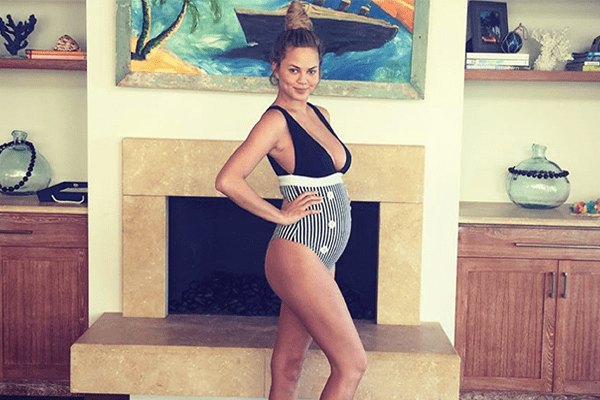 An American model, Chrissy Teigen posted a video on Instagram that she is pregnant with her second baby.

She posted a video with her baby Luna. Chrissy asked her daughter, “Luna, what’s in here?”
“Baby”, Luna replied pointing at Chrissy’s belly. She is so damn happy that she can’t just hide it.

Chrissy is a wife of famous American Singer and actor John Legend. They are expecting to have the baby number 2.

No wonder Luna Simone is soon to be a big sister.

E! News has interviewed Chrissy. Traveling around the New York City with E! News’ Jason Kennedy, Chrissy stated that she doesn’t have pressure from anyone to have another baby. She further added that she can’t help but think about a future with more babies.

She said that she is so happy to be a mom again and thinks about baby more than anyone else. She doesn’t have the patience to have the biggest family.

Chrissy continued the interview with Jason saying, “I think I’m enjoying my time absorbing and seeing everything—all her new little steps and new moments—and being there for them.”

The couple, parenting a baby girl Luna, generated and froze embryos via IVF a few years ago. In an Interview with Instyle magazine for November 2017 issue, Teigen told that she plans to go for a frozen embryo transfer this time to try to have a second child.

Tigen is very broad-minded about the struggles on couple’s infertility, she also revealed that she had suffered a loss before Luna was born.

Chrissy is also an author of the cookbook named Cravings. There are two volumes of Cravings until date, Cravings 1 and Cravings 2. In the photoshoot of cookbook Craving 2, she had kept Luna in many pictures where Luna mimic to eat foods. We hope her second baby might be on the third volume of Cravings.