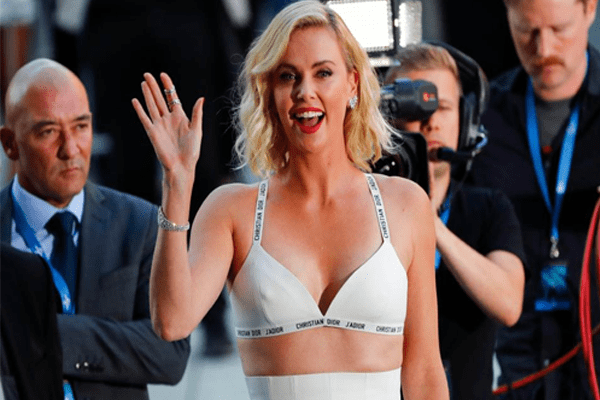 Charlize Theron attended the latest premiere of her new movie Atomic Blonde in Berlin and she sizzled the red carpet with her simple yet chic look that made a huge statement. Charlize Theron at Atomic Blonde Berlin Premier wore all white. She rocked her white bra with a white miniskirt. Her leather mini skirt was designed by Dior. Also, her white cotton triangle bralette was by Christian Dior. Her miniskirt was high rising and slightly was boning through the waist.

Tonight was…beyond words. Thank you Berlin for an incredible world premiere!!! And a huge thanks to my amazing team who created this look @lesliefremar @francescatolot @enzoangileri #AtomicBlonde

Theron looked blonde and beautiful wearing her red lipstick that matched her red nail polish. She wore white pumps as well which gave her long wide legs a perfect touch.

Charlize Theron at Atomic Blonde Berlin Premier looked edgy and classy and the dress perfectly matched her role in the movie Atomic Blonde and also her personality in real life.

Charlize Theron’s new movie, Atomic Blonde is out and we can just not get enough of it! Theron has given her all in the new movie. As per the reports, Theron did her own stunts in Atomic Blonde. She even accidentally cracked her teeth. But it is nothing new for the very strong and focused Charlize Theron.

Charlize Theron at Atomic Blonde Berlin Premier totally stole the show. The 41-year-old actress has been defying age with her angelic beauty and charm. We hope that her role as an agent in Atomic Blonde will be as successful as her past endeavors.

Secrets that Charlize Theron stack under her pillow