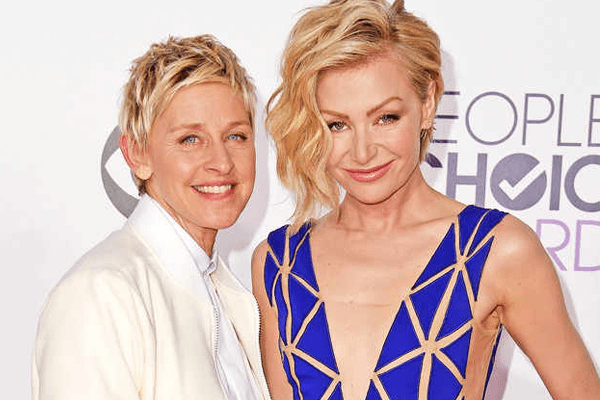 Picture credit:E!Online
Popular TV show host, Ellen DeGeneres and her wife Portia De Rossi had to move out their pets from their home due to the danger of California Wildlife fire. The California Wildfire has been spreading over the past week and damaging and destroying hundreds of properties.

This duo is fond of cats and dogs and has them in several numbers. A few months ago, in October, the couple bought 18.6 million USD beachfront home in Carpinteria, situated near Santa Barbara.

The Thomas Fire, one of the stormy wildfires spreading in California has already damaged and destructed a lot of properties, evacuated road closures and has spread unhealthy air in Santa Barbara Country along with neighboring Ventura Country.

What has Ellen Degeneres to say about the California wildfire?

DeGeneres tweeted on Sunday mentioning, “Our house is under threat of being burned by California Fire. We had just removed our pets. I have been praying for everyone to be safe and grateful to all the incredible firefighters.”

Our house is under threat of being burned. We just had to evacuate our pets. I’m praying for everyone in our community and thankful to all the incredible firefighters. The live stream is on https://t.co/FTcKVvHO16

The daytime host tweeted again, “The public in Montecito area have been checking up on each other and helping to get animal and people to the safety area.” “I am grateful to be a part of this community. I’m sending my immense love and gratitude to the fire department and  Sheriffs. Thanks to all. #ThomasFire”

Everyone in the Montecito area is checking up on each other and helping to get people and animals to safety. I’m proud to be a part of this community. I’m sending lots of love and gratitude to the fire department and sheriffs. Thank you all. #ThomasFire

Portia de Rossi has yet to mention anything in the social media sites. However, we can see that she loves their pets dearly.

As mentioned on CAL FIRE website, the Thomas fire started on 4th of December and has burned 173,000 acres of land, with the destruction of more than 750 structures. On Sunday morning, compulsion has been made to remove the life and properties in the area around DeGenerous and de Rossi’s house.

Evacuations have also been ordered for some areas of the Montecito – home of celebrities like Oprah Winfrey.

The classical house of DeGeneres and de Rossi is a massive Italian-style villa in the Santa Barbara area. They have been trying to sell for 1 year. It is in the sale for 39.5 million USD.

The California Wildfire was 15% contained on Dec 10 and smoke could be seen till dozens of miles.

A week ago, numerous residents of that area, including celebrities like Paris Hilton and Lea Michele, evacuated their homes after the threat of another California wildfire.
Ellen DeGeneres and her wife Portia De Rossi