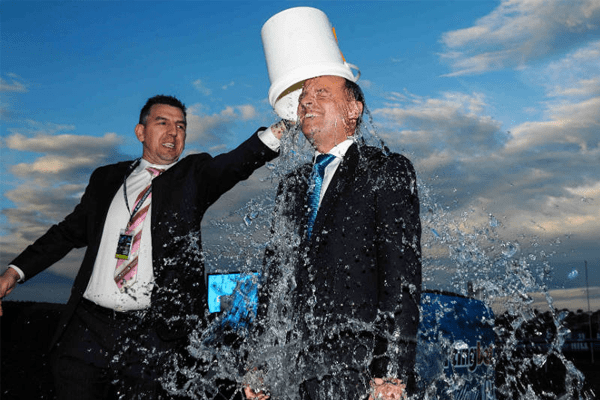 Picture credit: Enstarz
The person who played a role as the inspiration behind the ALS Ice bucket challenge is no more with us. Anthony Senerchia Jr. expired this past weekend soon after 14 year battle with ALS(amyotrophic lateral sclerosis).

Anthony had really positive aura and attitude and of course fighting spirit that helped him cope with doctor’s expectations by living more than a decade beyond their prognosis, his Obituary said.

Anthony would give all this credit to his love and his desire to be with his beloved daughter, Taya.

During all time of his combat, Anthony maintained a calm and positive attitude and said: “It’s not always what we grab from life, but what we give in return to other is what finally count us.”

His wife Jeanette said to Journal News that “It’s a difficult disease and tough when you’re losing. Your body is failing you. But he was a fighter. He was our light. He made our life better.”

Because of his such attitude and helpful mindset, he created the Anthony Senerchia Jr. ALS Charitable Foundation.

Talking about ALS Bucket challenge, the ALS Association could fund over 150 ongoing research projects and collected more than $115 million within

At first “ALS Bucket Challenge” started in 2014 when Anthony’s wife Jeanette Senerchia’s cousin, who is a golfer expert Chris Kennedy, got nominated to participate in the challenge. That time the challenge was not related to ALS. But it started when Chris passed the challenge to others . Then he decided to choose ALS Association as a beneficiary as Anthony had been battling with the disease.The challenge then took off from there and became viral.

The idea that stands for this challenge was that the frozen water would simulate the experience of muscle stiffness that individuals diagnosed with ALS feel.

This challenge started becoming viral, reaching 440 million views and collecting a total of $200 million, as estimated by ALS news.

The challenge was quite helpful, that led to donations from renowned stars and celebrities like Oprah, Bill Gates and LeBron James.

“A thing started with a small gesture put smile on Anthony’s face and brought awareness to the dreadful diseases has turned into a national process”
Kennedy told TIME, “Something anyone could never have dreamed off.”

Though he left us, Thanks a lot for your positive attitude and great humanity.