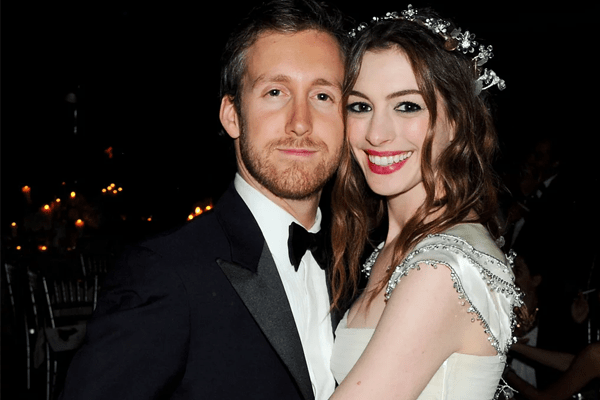 Photo Source:popsugar.com
Anne Hathaway and Adam Shulman are a happily married couple and it is a rare sighting to see in the Hollywood arena. Hathaway shared on ‘The Late Show With David Letterman’ about her relationship with her husband. Anne Hathaway’s prediction that she would marry Adam Shulman even before their first date happened came true in the years to come. Let us get into the adorable details of how Anne Hathaway’s prediction of the lovely pair coming together came true!

The Les Miserables star, Anne Hathaway had a lot to share when she appeared on ‘The Late Show With David Letterman’. Hathaway shared sweet details of her relationship with her husband. First of all, Hathaway went on to admit that she is “married to a nice guy”.

Adam Shulman is a well-known producer and a jewelry designer.

Anne Hathaway earns more than her husband and also falls in the list of Top 10 Hollywood actresses grossing more than their male co-stars. By looks, he is considered one of the most innocent looking personas in the glitz and glamor industry and indeed he has maintained this stature in his real life as well.

Anne Hathaway revealed that the couple had met through mutual friends. Anne revealed that the first time she had met her, she “was like what is the deal with that guy” but then had “backed off” when someone told her that Adam had a girlfriend. Later when she found out that Adam was indeed single, she asked him to come to New Orleans because she “had a spare ticket”

Anne Hathaway’s prediction at the time that the couple met was that they would get married if it went well. She shared that if it ended up badly, she thought they would “never see each other again”.

The couple eventually went on a few dates and decided that they had fallen in love with each other.  Eventually after 4 years, in 2012, the couple went on to get married. Together, the couple has a son named Jonathan Rosebanks Shulman born in March 2016.

Their relationship till date has been similar to that of a fairy tale love story. The couple has been doing exceptionally well in their respective careers and perfectly manage to take good care of their son. Anne Hathaway will soon appear in the upcoming movie, Ocean Eight.