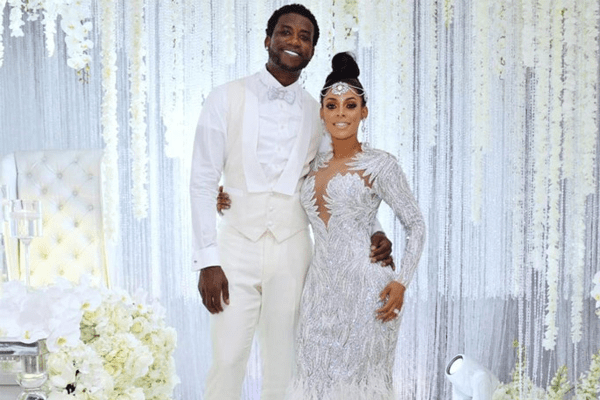 Unfortunately for many ladies, Gucci Mane is married! Gucci Mane got married to his longtime girlfriend Keyshia Ka’oirn Tuesday. October 17th, 2017 saw a star-studded wedding as Gucci Mane and Keyshia walked down the aisle. The ceremony was lavish and attended by many of the bride and groom’s friends and co-workers.

They wore whites to make the wedding extra special. Kim Biermann came along with her daughter Brielle. They also shared a video of the lavish wedding on their Instagram account.

Kim Biermann was super excited for the wedding and gushed that she was “so excited to be here and be a part of the beautiful connection”! Kim was sure to add some of her all famous lines in the toast and said that her advice would be that the couple has a “long-lasting marriage” and to have “sex, sex and more sex” which she added hey might have already nailed.

The night before the wedding, they had an extravagant “rehearsal dinner”. The couple seemed to have spent thousands of dollars on their wedding and had nothing to spare!

In the dinner, Ka’oir came flaunting her red, long-sleeved gown with a tulle skirt. The groom also seemed to coordinate with his bride’s dress and wore a red suit with a black lapel and looked dashing as always.

Of course, the dinner would not end without the exchange of gifts. Ka’oir was conscious enough to gift her husband an adorable matching Mr. Davis and Mrs. Davis necklaces. Also, she gifted him an additional diamond bow tie which he later wore in the wedding. Gucci gifted his lady love a matching his and hers 2017 Rolls-Royce Wraiths.

Gucci proposed Keyshia in November 2016 while the couple was having a basketball game date night. The proposal was very sweet where Gucci popped a huge diamond ring and asked Keyshia to marry him while caught on kiss-cam!