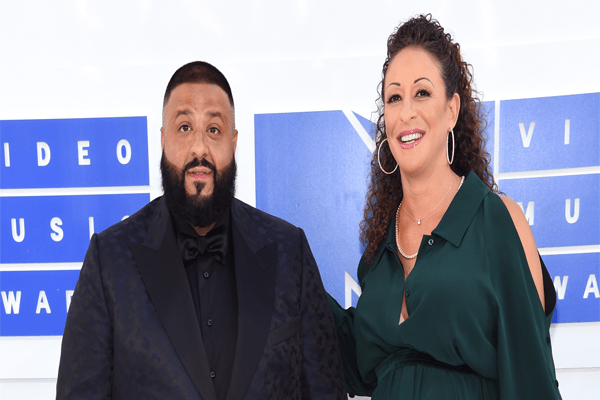 DJ Khaled is an American record producer, author, former radio host and a Disc Jockey “DJ” (Of course he is, look at his name!!!). With hits like I’m the One and Wild Thoughts, he has risen to the top of the music industry and has been a topic of conversation. Due to his success, people have shown a deep interest in learning about Khaled’s wife/girlfriend.

Well, DJ Khaled does have a fiancee and her name is Nicole Tuck. The 39-year-old Nicole started met Khaled a long time ago and the two have since gotten engaged. The two have been together for as long as 11 years. The lovely couple have a son together and his name is Asahd.

Who is Nicole Tuck?

Nicole Tuck is an American citizen of Palestinian descent, just like her fiance DJ Khaled. She grew up in the city of Miami and is an educated woman.

Nicole graduated from Marymount Manhattan Univesity with a Bachelor’s degree in Fine Arts in 2003. She followed it up by completing her Master’s degree from Fordham University in 2005.

After completing her studies, Nicole started her own clothing business. Her clothing company was named Abu Apparel and was launched in 2011. Abu stood for “Always Be You”. The main motto of the clothing line was to bring confidence and belief in people to be true to themselves.

Nicole’s fiance DJ Khaled served as the face of the company. The company did very well in New York. After running it for a few years, she shut it down and started managing her fiance Khalid in an unofficial capacity.

On October 23, 2016, Nicole gave birth to her and Khaled’s first child, a son who was named Asahd Tuck Khaled. Khaled showed the birth of his son on Snapchat as well. Both DJ Khaled and Nicole love their son very much.

The young child Asahd is already a very busy man. He has an endorsement deal with Jordan and was the executive producer of Khaled’s album Grateful. He showed off the cash he made on his Instagram account (Yes you heard it correct, he has an Instagram handle. Bless the child.)

Along with loving her fiance DJ Khaled and her son Asahd, Nicole has also expressed her love for animals. She loves all kinds of animals as and doesn’t shy to express her love.

She constantly posts pictures with various animals on her Instagram handle. She has posted photos of her with a dog, a cat, and even a tiger.
For more news and entertainment, visit Superbhub.