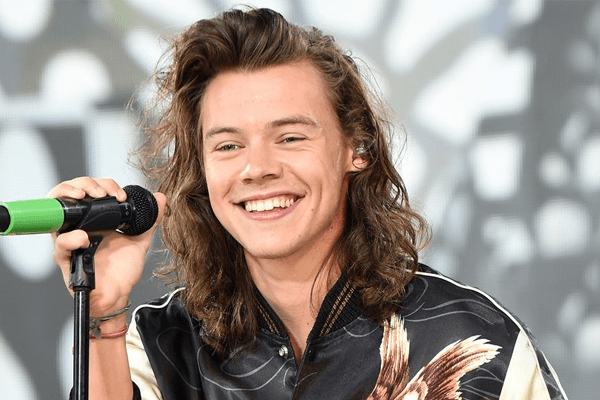 Harry whose full name is Harry Edward Styles was born on 1st February 1994 in Redditch, Worcestershire, England, UK. He was born to Anne Cox (née Selley) and Desmond “Des” Styles. He spent most of his childhood days in Holmes Chapel, Cheshire with his sister Gemma Styles. Styles is of English nationality and white ethnicity. He is also the former member of boy band One Direction.

Harry Styles’ net worth is $50 million. He earned this fortune from his music career as a singer and a songwriter.

Harry Styles came into the limelight when he took part in the seventh season of the British TV singing competition The X factor. Harry had come as a solo performer but he was eliminated. Later he was brought back with other contestants, Niall Horan, Zayn Malik, Liam Payne, and Louis Tomlinson and formed a band named One Direction which led them to come in the third place. The group quickly gained fame after they were signed to Simon Cowell’s Syco Entertainment in 2010.  Later on, the band disbanded in 2015.

Harry Styles was individually signed to the Columbia Records as a solo artist. On 12th May 2017, he released his first studio album under his own name. Harry Styles’ net worth has been derived from his huge salary from his various tours and albums with his band.

Some of the top Harry Styles’ songs are Sign of the times, Sweet Creature, Kiwi and others.

Besides singing, Harry Styles also has acted in a movie called “Dunkirk.” Dunkirk was released in July 2017 which made a huge amount of profit. The movie earned an astonishing amount of  $527.3 million in the box office.

Soon after that, Styles went on to be in a relationship with the singer, Taylor Swift in October 2012. But the couple parted ways in January 2013. Swift who is known for writing songs about her ex-boyfriends is also rumored to have allegedly written a song about Harry Styles after their breakup which was titled “Style”.

In 2018 Harry broke up with Camille Rowe after one year of a relationship. Because of his good-looking many girls fall for him. Since the broke up with Rowe he is possibly single. 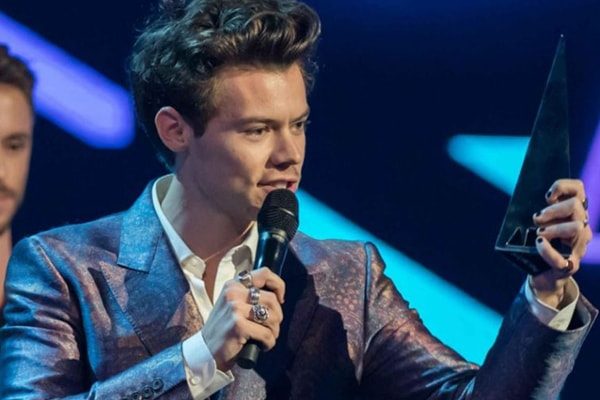 Over the years Harry Styles has received a lot of awards. Picture source: Yahoo Lifestyle.

Harry Styles has got over 40 tattoos around his body parts including in his biceps, hip, index finger, chest, and more. 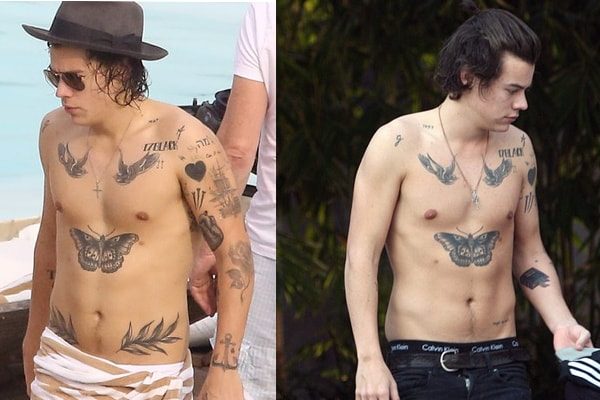 Harry Style has got a lot of tattoos. Picture Source: Capital Fm.

Harry has a tattoo with naked mermaid he doesn’t have a special reason behind the tattoo but he mentioned that he loves a mermaid. On his left tricep, he has got a creepy looking skeleton man dressed up in a suit and fedora hat and is one of the most unique designed tattoos. Among all, one of the biggest tattoos he has got is of an outstretched wing of a butterfly in his abdominal which symbolizes transformation and change.

Harry has the tattoo of Swallows on his chest which represents traveling and being out on the road all the time but always finds your way home. He has got other numerous tattoos like an old-school handshake, the Holy Bible, the ‘Brasil’ one, letter ‘A’, cross,  fern leaves, ship, and others.