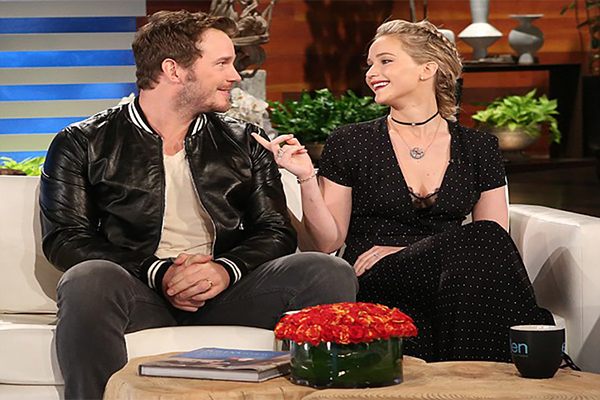 The Academy award winning American beauty, Jennifer Lawrence is all set to release her upcoming movie Passengers with the remarkable American hunk, Chris Pratt. The duo appeared unannounced at the Ghetto Film School in NYC startling the students there.

The hilarious and lovable due grabbed our attention already in the past week when Chris Pratt began posting pictures with Jennifer Lawrence’s face being cropped out. Moreover, he jokingly posted a picture of Jennifer Lawrence with Jennifer’s face cropped and pasted on his own photo. They are at it again with the promotion of their upcoming movie passengers. The duo is on a quest to promote their upcoming American romantic science fiction thriller movie titled Passengers.

When is it that super stars like these two take time out of their super busy schedule to surprise aspiring filmmakers? On December 6 2016, Lawrence and Pratt took on to surprise the students of Ghetto Film School based in New York. The duo clicked pictures with the star-struck students and also had a round of questions and answers. The environment was very pleasant on Tuesday when the duo met the students.

The non-profit institution aims to recognize and flourish the talents of young aspiring film makers. It was opened in 2000. Dozens of snaps were taken and the entire time seemed to be quite interesting for everyone. Jennifer flaunted her black coat and Pratt went for a simple denim and shirt attire. Jennifer Laurence opted for a more natural look with a pop of lips stick and sported her chic sun glasses.

The Duo is currently on a tour or the promotion. They recently landed to America after their promotion ended in Europe. Jennifer Lawrence was also seen wearing an elegant black lace dress at the screening of the Passengers movie. The movie, Passengers is about a spacecraft travelling to a colony planet transporting many people, thus giving it the title, Passengers. By the looks of it, the movie seems to be quite exciting as the posters and the brief trailers speak a lot. The movie will release soon in the USA on December 21 2016. The seats are already hot and the popcorn is already set. The audience can’t wait to hit the cinema to watch the movie!