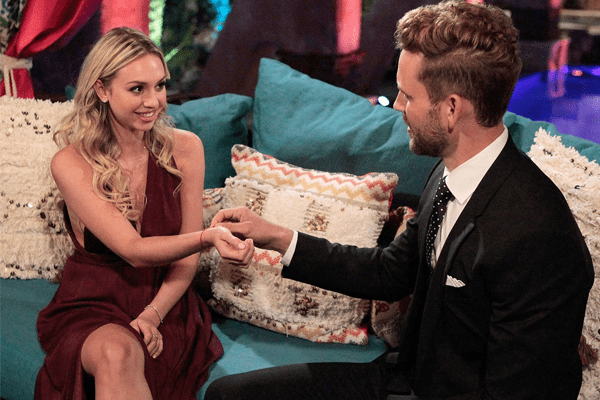 With the commencement of the New Year, we are blessed with yet another spicy season of The Bachelor on ABC. The Bachelor of Season 21, Nick Viall kicks off the premier by kissing two of the ladies during his meet with the diverse women.

It is that time of the year again when the cold January weather was filled with spice with the warm premiere of the popular reality show The Bachelor. Nick Viall is a software sales executive from Milwaukee, Wisconsin. Nick currently lives in Chicago, Illinois and is looking for some love.

Nick kicked off the show by meeting some ladies of the show. The profession of the ladies ranged from teaching to an attorney to nurse and more. He astonishingly met his past hook up and the twitter was wild with reactions from the viewers.

However, the show was lit on fire when Vanessa kissed Nick making it the first kiss of the season! One of the ladies, Jasmine G. cried over the fact that Nick did not have time for her! Yes, that did happen! Another interesting thing of the night was when Nick gave Rachel the first rose of the season because he was allegedly taken away by her ‘aura’! The two kissed making Rachel the second women to be kissed that night.

Tension sparked in the mansion when Nick stepped out to contemplate about the 30 women. More recently, he also listed the women in order of preference and Vanessa topped the chart. The women he kept in order after Vanessa are Danielle L, Christen, Astrid, Corrine, and others followed.

Nick Viall also got slapped hard in the premier which was more of a shock, but since it is The Bachelor so all of the drama is acceptable. There have also been some sizzling moments where Corinne comes to Nicks room to get intimate.

Yet another aspect of The Bachelor that is new and is picked up positively by the audience is the diversity among the group women. The aspect of multiple races has made the audience extremely happy.

More spicy things are happening in The Bachelor. Nick becomes the sixth Backstreet Boy in the show and there is some sexual aggression as well. All eyes are on The Bachelor at this time of the year. Will this bachelor find true love in the show? We are yet to find out!

Some behind the scenes and more. Hope you enjoy! TheBachelor https://t.co/HDA0Zw0az9

Some behind the scenes and more. Hope you enjoy! TheBachelor https://t.co/HDA0Zw0az9