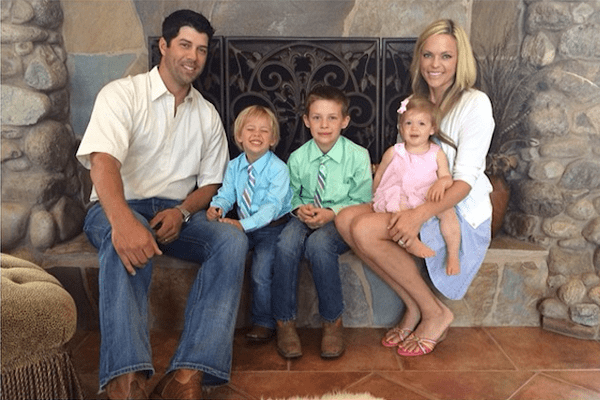 Jennie Finch can be regarded as an inspiration to many women. Not only is Jamie Finch a legendary softball player but she is also an exceptional mom to her three kids. Jennie Finch has found the perfect balance between her athletic career and her personal life and we all should definitely respect her for that. Let us get into the details of Jennie Finch’s married life!

Jennie Finch’s husband Casey Daigle is one lucky man. Jennie Finch’s married life has been going great right now because of the perfect balance that she has created and we salute her for it. Jennie Finch got married to her longtime lover, Casey on 15th January 2005. Casey just like Jennie is an athlete and very good at it. Casey was a Major League pitcher who is known to have had an exceptional career. The couple met in 2002 and developed a deep love so they eventually got married three years later.

Came up on my time hop from last year… I have to say as much fun as the #ESPYS are and how we’ve enjoyed them tremendously over the years, it was quite relaxing on our couch eating meatballs, rice, & gravy! ?

Later Casey took Jennie’s breath away when he “blindfolded” her and took her to the mound and said that she had been “the queen of the diamond for four years” and that he wanted her to be the queen of his heart!

After the couple got married, Casey couldn’t wait to be a father. The couple went on to have their first child Ace Shane Daigle in 2006. Eventually, they had their second baby, Diesel Dean Daigle in 2011 and their third child Paisley Faye Daigle in 2013.

It is evident that the couple has been raising their kids in the proper way. Jennie revealed in an interview with PEOPLE that her kids love to play outdoors with her.

Had so much fun coaching this boy & our lil’ 6u Smash team! I’m SO proud of them, the progress they made and most of all the FUN we had! #TeeBall

She has also posted a picture on Instagram of her kids playing baseball with the entire family. The 2004 Olympic gold medalist, Jennie has athletic kids. Her eldest son started his travel ball from 2012 and Jennie is very excited about it! We wish the best for Jennie Finch’s married life and her kids!