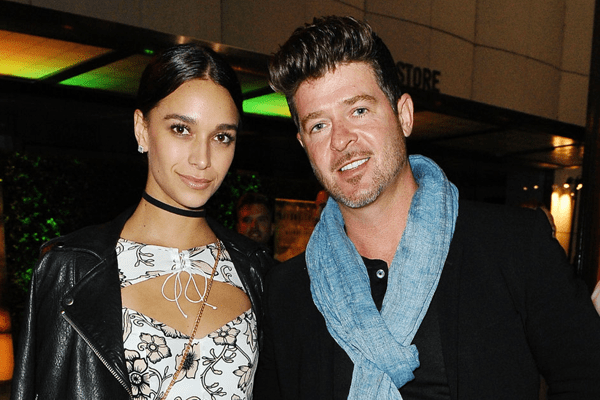 Picture credit: AOL.com
April Love Geary has already started counting the days for her baby to pop out.

After the video of Christmas celebration with her boyfriend Robin Thicke, April Love Geary shared a sexy to-be-Mummy photo on Instagram.

Robin and I are very excited to share with you all that we’re having a baby! The due date is March 1st, Alan’s birthday! ❤️

April keeps sharing her to-be-Mummy photos on Instagram.Sharing a sonogram, she wrote,  “Hey Guys!!!See what I’m making!!!! Her foot is over her head. She’s long legs like her mama!”

Robin and April journey as official couple in public began in May 2015 during a party at Cannes. They had dated for six months then.

They then started getting spotted together enjoying in a beach vacation in Maui. Robin’s son, Julian, then 5 was also with them.

Robin had a son from his ex-wife Paula Patton.

Also read: Robin Thicke and his lady love April Love Geary are pregnant with their first child together

And prior to his passing, Alan, Robin’s dad, approved the new leading lady in his son’s life.

“She’s really lovely. [Robin has an] album coming out and April is supportive too,” he said E! News. “She’s lovely and we like her a lot.”Talking about the age difference, Alan’s wife Tanya didn’t take a big deal.”The apple doesn’t fall far from the tree,” she said funnily.  “She’s a grown young lady. Indeed very beautiful, charming, smart, mature young lady.”We don’t have the patience to meet this little one in 2018!