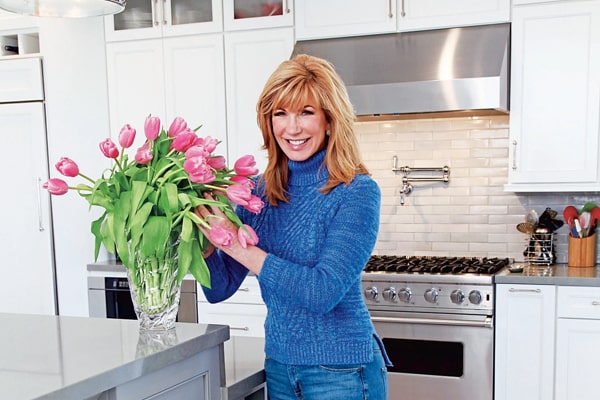 Every individual wants to succeed at one point in their life and thus exercise in what they are best in. While doing so, American host Leeza Gibbons has come a long way since 1976. Known as co-host for Entertainment Tonight, Leeza has earned her reputation via hard work and dedication.

Let’s get to know more about the aspiring woman, Leeza Gibbons’ net worth, relationships, lifestyle, and many more. And if you think age matters in a relation, wait until you read about Gibbons’ partner.

Who Is Leeza Gibbons’ Husband?

Leeza Gibbons is a beautiful blonde woman with exceptional talent and a successful career. Not just her career, she’s been way ahead and happy in her marriage with Steve Fenton. Leeza Gibbons’ husband, Steve Fenton, is the New York Times best-selling author known for Where a Man Stands, Good Advice, and One Step Beyond.

The couple shared their vows on the rooftop of the Montage Hotel in Beverly Hills on April 20, 2011. Interestingly, Leeza Gibbons’ wedding venue is the place where they had their first date. The ceremony was hushed and pretty. Furthermore, the couple cannot help but have kind words for one another. 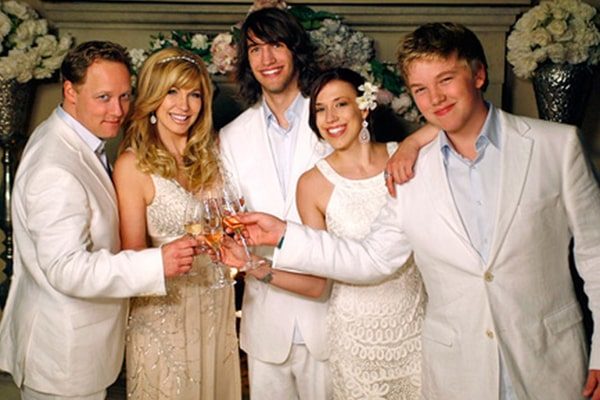 Interestingly, Leeza Gibbons’ husband is 13 years younger than herself. Despite their age difference, the couple is living peacefully and enjoying their marital life.

Before Steve, Leeza Gibbons was married thrice. Her first marriage with John Hicks did not last more than two years. The couple were married in 1980 and were divorced by 1982. Likewise, Gibbons’ second husband, Christopher Quinten, was a British actor who landed in her life in a charity fund-raiser in New Zealand.

Gibbons and Quinten shared their vows on December 10, 1988. The former couple shares a beautiful daughter, Jordan Alexandra (Lexi) Gibbons. Unfortunately, Gibbons’ second marriage did not last as well, and the couple parted their ways in 1991.

Moreover, Leeza Gibbons’ third marriage with actor and architect Stephen Meadows also did not survive. The ex-couple was married from 1991 to 2005 and share two children, Troy Meadows, and Nathan Daniel Meadows. The former couple had joint custody of their children after their divorce.

Meanwhile, Gibbons’ husband, Steve Fenton, is also a divorcee. He was married to Gail O’Grady on August 12, 1995. Unfortunately, the marriage ended after a year into marriage in 1996.

Although both the partners experienced failed marriages, let’s hope Leeza Gibbons and Steve Fenton enjoy their happily ever after now.

How Much Is Leeza Gibbons’ Net Worth?

Leeza Gibbons is one of the most exceptional American host known for co-hosting Entertainment Tonight along with her daytime talk show, Leeza. Since 1976 till today, Leeza Gibbons’ net worth has grown massively to $40 million. Kudos to her hard works and dedication, she can amass this colossal amount.

Leeza Gibbons’ journey as a television host began at WSPA-TV in Spartanburg. She stepped further as a co-host in PM Magazine for KFDM-TV in Texas and climbed up to WFAA-TV in Dallas. Later on, she was named as a co-host of ET alongside John Tesh. From there flourished Gibbons’ hosting journey, and she contributed many shows with her talent.

Alongside Gibbons’ job as a host, she has appeared in multiple tv series including Just Shoot Me!, Lois & Clark: The New Adventures of Superman, Dream On, Soapdish, and many more. Likewise, she also has five credits as a producer for America Now, Leeza, The Michael Essany Show, and Verdict, Robocop. All these varieties of actions must have aided Leeza Gibbons’ net worth greatly.

Presently, Gibbons is co-hosting the Rose Parade since January 2016. Likewise, she is also hosting the 3 Week Yoga Retreat since 2018 and is the CEO of Leeza Gibbons Entreprises and a non-profit organization, Leeza’s Care Connection.

While ‘Leeza Gibbons’ became a household name, she has also written numerous books that have allowed her fortune to grow magnificently. Few of Gibbons’ books are listed below, along with their respective prices.

Other Gibbons’ books that have received positive responses are The Family Guide to Alzheimer’s Disease, Fierce Optimism: Seven Secrets for Playing Nice, and Winning Big. The earnings from these books also aid Gibbons’ net worth. Furthermore, she has even released a line of makeup called Sheer Cover through Guthy-Renker. She earns from her makeup line as well.

Besides business, Leeza Gibbons has the right eye for real estate. In March 2018, she listed her Beverly Hills house for sale at $18.5 million and sold the house for $15.5 million in November. Leeza Gibbons and her writer husband, Steve had purchased the house in $7.95 million in 2014. Likewise, the couple bought a home in the Hancock Park neighborhood of Los Angeles for $5.46 million in August 2019.

Who Are Leeza Gibbons’ Parents?

Born on March 26, 1957, in Hartsville, South Carolina, the USA as Leeza Kim Gibbons, she was a bundle of joy for her parents, Carlos Gibbons and Jean Gibbons. Leeza Gibbons’ parents were very supportive of her since her childhood and let her choose her career.

According to IMDb, Leeza Gibbons’ father is known for his work on Home and Family and is still living a healthy life. However, her mother, Jean, died at the age of 72 on May 22, 2008, due to Alzheimer’s disease complications. And she wrote a book in her memory to soothe her loss.

Thinking of my Dad and all those who proudly wear or wore a uniform. There are no words to thank you. We are grateful for your service. For your enormous gift. #VeteransDay #military #proud #servicemember #freedom #veterans

Gibbons was not the only child in the family. She grew up alongside her siblings; a brother, Carlos Gibbons Jr., and a sister, Camille (Cammy) Gibbons. All three siblings are unbeaten in their respective fields and are enjoying their lives.

Let’s hope Leeza Gibbons enjoys her life to the fullest.