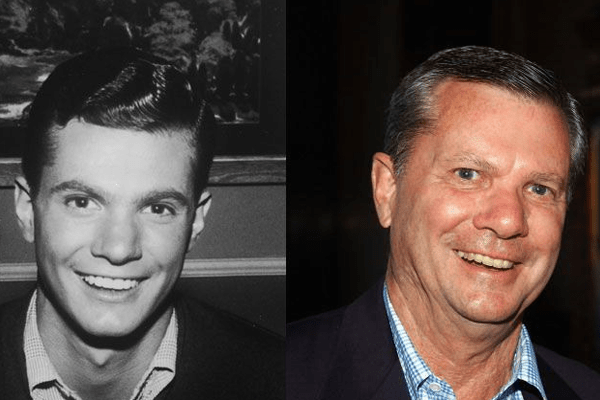 Dwayne Hickman was born in May 18, 1934 as a younger brother of child actor, Darryl Hickman. Darryl is an American actor executive who has net worth of $500 thousand. He directed for TV series such as Head of the Class and Designing Women.

Dwayne ‘s birth name is Dwayne Bernard Hickman. He graduated from Cathedral High School in 1952 and intended to become a Passionate priest, but ultimately he chose not to do so. He earned a B.S in Economics from Loyola University in Los Angeles.

In the year 1942, he made an early appearance in comedy Melodies Old and New  “Our Gang”. Dwayne Hickman with his brother Darryl co-starred in an early episode of Men of Annapolis,the syndicated military drama. It was filmed at the United States Naval Academy in Maryland.

As a teenager, he and Darryl starred as a guest appearance in a 1950 episode of The Long Ranger titled Two Gold Lockets. In 1955 he appeared in another episode titled “ Sunstroke Mesa”. He was popular as “ Chuck” on The Bob Cummings Show from 1955-59. He consider Cummings Show taught him everything he needs to know about acting.

Dwayne  was doing Bob Cummings Show in 1958. The same year,he was casted as the lead of The Many Loves of Loves of Dobie Gillis, which aired on CBS from 1958-63. His character was again as a teenager which stereotyped him later because he was too old for such role.

He also made appearance in minor beach films .

On June 23, 1960, Hickman appeared on NBC’s The Ford Snow, Starring Tennessee Ernie Ford. He and Annette Funicello appeared together in an episode of ABC’s circus drama The Greatest Show on Earth.starring Jack Palance in 1965, Hickman appeared in the comedy film Cat Ballou with Jane Fonda and Lee Marvin and in the film Dr. Goldfoot and the Bikini Machine.

In the year 1965-1966 television season, he appeared as a guest star on the episode “ Run Sheep Run” as a soldier on ABC’s Combat who froze during an attack by a German machine gun nest which resulted in the death of a fellow Gl.

In 1977-  1988, Dwayne Hickman served as a programming executive at CBS. He worked as a director on various television series which includes Designing Women and Head of the Class. He repeatedly portrayed the role of Dobie in two television reunion broadcasts. That was, the one-shot pilot Whatever Happened To Dobie Gillis (1977) and the TV movie Bring Me the Head of Dobie Gillis ( 1988).

In 1994 he wrote his biography, aptly titled “Forever Dobie.”

He got a net worth of $500 thousand. The amount is largely earned through his successful career as an actor. Aside from acting, Dwayne worked as executive for CBC and director, which also increased his wealth.

Many people enjoy sharing rumors about the sexuality and sexual orientation of celebrities. However the fact is not on aired whether Dwayne Hickman is gay, bisexual or straight.

He is a critically acclaimed artist. He has had many gallery showings. His paintings are represented in

galleries across the country and held in many corporate and private collections.

Dwayne Hickman acting mentor was the late Robert Cummings. His wife, actress Joan Roberts is a successful voice over performer.