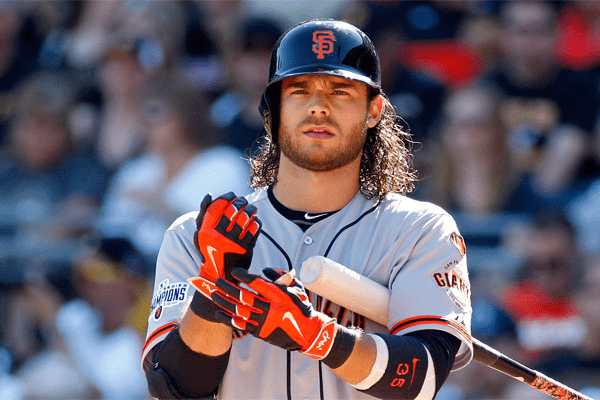 Solid defensive infielder, Brandon Crawford is an outstanding player known for his strong throwing arm. The all-round shortstop player, Brandon Crawford achievement can be listed including him becoming the sixth player to hit a grand slam in his first major league.

Brandon Crawford is an American baseball player who plays for the San Francisco Gaints in Major League Baseball. One of the Brandon Crawford achievements was getting the title “Most Valuable Player” twice while playing college baseball, while there are more to talk about. He is also notable for being the sixth player to hit the grand slam in his first major league.

Brandon Crawford was born as Brandon Michael Crawford on January 21, 1987 in Mountain View, California and he grew up in Pleasanton. His family moved to Pleasanton from Menlo Park when he was in elementary school. He was born as the oldest son of Michael Crawford and Lynn Crawford’s among four children. He has three younger sisters namely, Amy, Kaitlin and Jenna.

Since the early days, Crawfords had been a Gaints fan. Therefore, his family bought him seasonal tickets when the ballpark opened in 2000. Crawford was fascinated towards sports since the age of three. He was an active player since his early days and he started playing football, basketball and baseball when he was quite young.

Regarding education, Crawford attended University of California, Los Angeles (UCLA) and majored in psychological sciences. He played baseball for UCLA Bruins in 2006-8. With Crawford’s contribution, the team reached NCAA Regionals in three consecutive seasons making the history of the school.

For Crawford has always been a remarkable performance, his name was submitted to the theAll-Pac-10 conference team in 2007. With this nomination, Crawford career got into highlight as he was selected by San Francisco Giants for the fourth round of 2008 Major League Baseball Draft. This was the opportunity for Crawford to begin his career as a professional baseball player. In 2009, Crawford started his professional season with Class-A. Then in 2010, Brandon Crawford achievement in beginning stage of career was turning an opening player for the season in Double-A. Unfortunately, he broke his hand towards the beginning of the season as a consequence of which he had to quit baseball for 2 months.

With the growing craze on baseball, Crawford has earned reputation after making his Major League Baseball debut in 2011. He started the full season as a professional baseball player with Class-A Advanced San Jose Gaints. He hit 371 with home runs in 25 games with six homeruns. With due hard work and dedication, Crawford was promoted to Connecticut Defenders after which he scored 4 runs in 108 games.

Moreover, Crawford was rated the 38th-best prospect in addition to the 200th-overall top prospect in California. He has earned All-East Bay Athletic League honors thrice and All-CIF North Coast awards twice. Also, he received the title 2005 Foothill HS Athlete of the Year. He also brags Cal-Hi Sports All-State Infielder Honors. During his sophomore season, Crawford made a school record for stolen bases with 19. Altogether, he has compiled a .357 batting average with 23 doubles, five triples, nine home runs and 51 RBI during his three-year varsity career.

Crawford married a former UCLA gymnast Jalynne Dantzcher in Hawaii on November 26 2011. They have two daughters and a son. Brandon Crawford currently resides in Scottsdale, Arizona.

He owns a 5,477 square foot Luxury House, and its value is approximately $1.7 million. He owns some best luxury cars of brands Alfa, Romeo, Mercedes Benz and BMW. With all these, the estimated net worth of Brandon Crawford is $22.9 million as it has risen over a past few years by 31%. All the luxury and success in life also makes up Brandon Crawford achievement.

Brandon Crawford did not turn into one of the most valuable players with no hard work. He was full of enthusiasm and talent from the early days. To some extent, family support was the factor for Brandon Crawford achievement and honors, but a massive factor was his devotion towards his career that won him the luxury in life and a successful career.

Thanks for having me @GoSquirrels! Always enjoyed playing at The Diamond. Now hope to never play there again....no offense ?❤️✌? https://t.co/Xdm9qnAw91